Saving Your Wedding Dress for Years——Why?

Today I threw my wedding dress into the washing machine, followed by the dryer. When I got married in the 80's it was a big thing to preserve your dress. I can't remember why. It was going to be historically significant like all the other gowns from the 80's. It cost almost as much as the gown itself to have a Dry Cleaner put it into a magical box with a clear plastic window so you could admire it into old age.

This is how it went down

Over the past almost forty-years I've been dragging that giant box around the country. In Boston it took up half my closet. I never looked at it other than to shove it into a moving truck. After a couple moves in Texas, and a couple kids, I did allow my preschoolers to look through the viewing window. The dress had turned yellowish. That was highly annoying because I'd been allowing it to take up air-conditioned space in closets.

After that it came out of the box. It took up less room in a dress bag. But I continued to haul it into moving trucks and around the country to new states and new closets.

My daughter got engaged this year and picked out a gorgeous wedding dress. Afterwards I fished my old wedding dress out of a closet—not to compare or for any nostalgic reason. We got invited to a five year old's Prince and Princess party and needed costumes.

"You can wear this," I said to my daughter. I'd already chosen an old New Year's Eve dress for myself. Red. Sequined. It went perfect with my horned Viking hat with blonde braids. Viking Princesses are in. My Fashion Icon Status is maintained.

My daughter gamely tried on my old dress and stood in front of a full-length mirror. That's when she started to giggle. "What were you thinking?" she said, "Puffed sleeves? Anne of Green Gables or Little House on the Prairie?" Then quickly recovering she tried this, "I'm sure it was beautiful at the time, Mom. You were so skinny, does it even button on me?" (Yes, that worked by the way, and it was Little House on the Prairie for the record. Not the TV series, the books. Cooler, yes?)

Also those silk buttons are still in fashion AND my Mother-in-law was pretty scandalized about all my cleavage. (That dress went up to my chin but the fabric was almost sheer. It was obvious I had boobs—which was frowned upon outside of Music Videos in the 80's.)

Fortunately Now Time Has Slowed Down 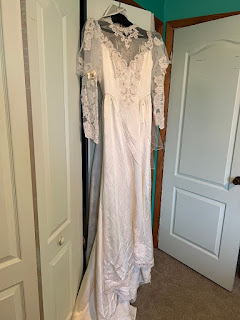 My daughter or any brides in the here and now don't need to worry about their dresses turning yellow or going out of style. I don't think they preserve them anymore anyway. When I asked friends from my time if they still had their old wedding dresses, most had gotten sick of storing them and donated them. One gave hers to get bloodied in a school play about a Vampire Bride.
After mine came out of the washer and dryer today—which it came through beautifully by the way—it went back into the closet for when the five year old is tall enough to play with it. Probably next year. Turns out I'm not nearly as tall as I thought I was. Either that or I'm shrinking on top of morphing into a Fashion Don't.