The Mystery of the Girl in Blue 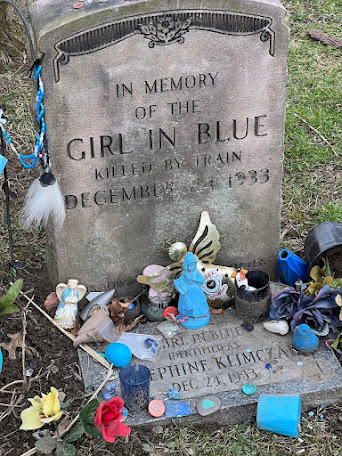 Ghosts of the past

Recently I visited my hometown, the first one, the one Kahtar lives in.  Willoughby's an idyllic place with art galleries and coffee shops. Very small town America. It was nothing like that when I lived there, full of tattoo parlors and biker bars before any of that was cool. I stayed in a Bed and Breakfast during my recent visit so I could walk everywhere. I bought myself a gnome and a meteorite from local shops and every day I wrote and drank too much chai at a funky coffee shop that used to be the hardware store.

Willoughby when I was a kid was practically designed to produce writers. You couldn't go very far without tripping over stories and even now the shadows of them remain. I visited Squires Castle, because despite my hometown being in Ohio, it has a castle.

The small hills around our house had so many railroad tracks that even now a train whistle makes me nostalgic. In the woods off my backyard were the remains of an old cabin where I discovered a wagon wheel and dolls floating inside an old well. Before Indiana Jones was a thing I was digging up rocks and china doll treasures. A narrow river wound nearby, its banks were covered in purple and white flowers in spring and lilies in summer. A long fence separated our yard from a park and in the summer when I was a kid our pet monkey would sit on it.

The house is gone now, a parking lot for the park, but I could still see ghosts of memories that have inspired me for years.

My grandmother is buried in the Willoughby cemetery, and I took her  flowers and wondered what she'd make of the current pandemic. She was a little girl during the Spanish Flu and since I grew up with her I can tell you that she took flu season very seriously. I miss her and I'm lucky she let me be the free-range kid I needed to be.

The Girl in Blue

As a kid I never once tried to climb between train cars, or run over the tracks to beat an approaching train. I didn't even need my grandmother to remind me not to. (She did though.) There were plenty of stories about people who got too close to trains and stories, unlike mathematics, stick in my brain.

One of the most heart-breaking local legends was about The Girl in Blue. That's how we referred to her. In mental caps. The Girl in Blue is a hauntingly tragic story. Her tombstone reads:

The town, taken by the tragedy of the young woman, who despite having been hit by a train suffered no visible wounds or blood loss, buried her in the town cemetery in a donated plot. The Girl in Blue story haunted me. No one knew if she planned to jump in front of the train or what had happened. Local legend said that the train engineer saw her, saw a blur of blue, saw her stop running far too close to the train. They say he made eye contact and she looked terrified. 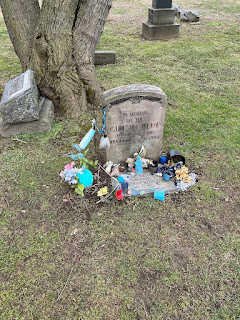 Growing up I couldn't find anything more about her. By then she'd passed from living memory into small town urban legend. In the 70's and 80's there were no books about her, no internet, no way to find out more about The Girl in Blue.

In the coming years when I had access to those things in other places, I'd remember and try to hunt for answers. I wasn't the only one because part of the mystery of The Girl in Blue eventually got solved.

Google made the World Smaller

Despite new information, there are still unanswered questions about The Girl in Blue, though we now know her name was Sophie. When I read the details unearthed by the newspaper article, I realized that she was from a town not so very far away from where I live now. We don't have a castle here, but we have fossils, waterfalls, and an occasional old headstone covered in leaves in the woods in our own backyards.

Do you ever find yourself bumping into the same story over time? Asking yourself the same questions again and again? I'm kind of hard-wired to dig for endings when it comes to stories. You don't grow up in a house with a monkey without having questions.

One thing that life/death/this pandemic has taught me is that life can change in an instant. People can disappear on us. Sometimes they leave behind a story, and sometimes you never know more than fragments of it.