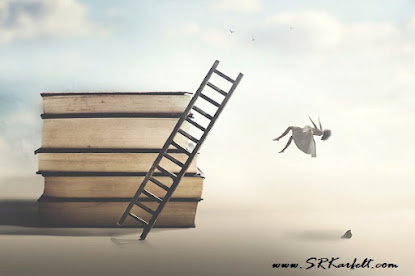 My dizziness has been going on for twenty years now. The good news is it's not inherently fatal. It sure feels like it is when you wake up spinning, or just start spinning. In the early years I spent a fortune on out-of-pocket medical costs. I was determined that this wasn't going to be my life now.

With everything I had I went from doctor to doctor looking for a cure. Hell, a diagnosis even. Somewhere I still have calendars and notes. I kept records of every migraine, every spin, every med, determined to find a pattern, a clue that would help. Eventually, after a few years in which all I did was see doctors and have tests, I gave up.

Determined to "Keep Myself Alive" as the late great Freddy Mercury sang, I decided that every day, every second, that I wasn't actively spinning, was going to be the best day of my life. That motto kept me going. I wrote novels, I traveled, I hiked, I even went skydiving. And some days I sat very still, not moving my head, while the world spun furiously around me.

I swore a lot.

Sometimes, mostly since the pandemic, I cried. Early on I trained myself not to cry. That sounds repressive but it was because I try not to move my head. Crying involves entirely too much dangerous head motion. The thing is, over the years, this shit has worn me down. Over time I stopped hiking. I stopped eating vegan, I stopped exercising much at all. I've never been a suicidal woman, I have a happy heart and I love life but I have little interest in spending my elder years spinning in a nursing home, so sometimes my decisions have been based heavily on, oh what the hell have I got to lose?

That may have been part of the reason I got on a plane to Greece late this year, pandemic or no. I definitely take risks my chicken-shit soul isn't entirely comfortable with. Vertigo has made me very now or never minded.

Getting back and forth to my happy island in Greece is a freaking challenge in the best of times. During COVID it's a four day journey each way. Upon arrival I tacked on three days of vertigo. Returning home I had another three days of it. Bad days. My husband had to help me get to the bathroom to pee. Normally I'm pretty good at walking blind and knowing which way is up and down. Not this round of spinning. That's when I cried.

Shortly after that I went for my annual physical and I admitted I was having trouble handling my chronic vertigo. I've just used up my coping skills. My doctor suggested I see a doctor who specializes in vertigo. She's had great success rate helping people, my doctor said. I agreed to see her. I had a couple weeks of anxiety over that. It's because one thing I've learned is that fooling with my vertigo can make it way worse.

But I've read and re-read Dr. Beh's book Victory Over Vestibular Migraine. One thing he said in the book was not to assume that you have only one type of vertigo, that it's often more than one problem when it's chronic.

Just between you and me, the first thing that impressed me about my local vertigo specialist was that she called me herself to set up on the appointment. It was a strange appointment. The doctor dropped me into positions, turning my head to and fro, her eyes inches from mine so she could see my eyes. Nystagmus is what she watches for. I'm going to resist going off on how many times I've had doctors do this to me. Suffice to say it wasn't my first rodeo, but it was the first time I was expertly taken through the Epley Maneuver and given immediate feedback.

It was the first time it worked.