Learning to Speak Greek with Duolingo 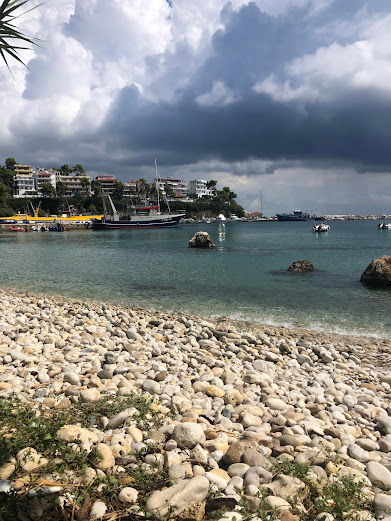 My favorite port in Greece

Here I am at an age when I really don't even want to say the number out loud and I'm finally learning a second language. I've been working at it for several years now. First I used the conversational language program called Pimsleur. I have it on audiobook and on discs for my old Jeep. For years instead of the radio when I'm driving I've been practicing basic Greek words. Kali-mera (Good morning). Catalaveno Hellenika (I understand Greek). Then Catalaveno Hellinka (I don't understand Greek). But I just wasn't really getting it. At some point I realized that the biggest problem was I often wasn't certain of the sounds. Was that a da? A tha? A thda?

All along I thought I'd never be able to learn to READ Greek. Speaking at some four-year-old conversational level was my goal. I wanted to be able to get in a taxi and ask for the port (limani) or the airport (aerodromio). My expectations weren't high. Friends told me to pick another language, something easier, something that I'd actually use. Yet Greece is my favorite country to visit. It's the language I want to learn.

Last year I downloaded the Duolingo app onto my phone. You have to learn to read the language you study on Duolingo. I'd taught myself the Greek Alphabet. It's a whole new alphabet. You know, alpha, beta, gamma, delta, epsilon, zeta, eta, theta, iota, kappa, lamda, mu, nu, xi, OMICRON... We all know that one. There are twenty-four letters, capitals and lowercase. I vaguely remembered some of them from my days in engineering. Though I've never really learned another language, I know shorthand, so sounds in a different format isn't an entirely foreign concept. Plus I've been stuffing Greek words forcibly into my brain with Pimsleur for years. 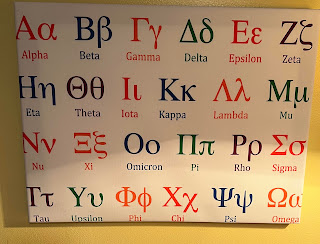 After a couple months I began to really remember words. I recognize a lot of them from Pimseleur. I see the variations of similar words. I'm not GOOD, but I'm determined and I am improving. Right now it feels more like I'm learning to read the language verses speaking it, but maybe there will come a day when it will click?

There's a free version of Duolingo, but I pay for the upgrade. I don't see how you'd get far on the app if you didn't. It's a bit of a game, something that I'm not much interested in. What I like is that it's handy to have on my phone. It switches between me translating a sentence from English to Greek or Greek to English. I have a Greek keyboard on my phone so I can write out Greek sentences in the language (unlike my loosely translated words above). You can also time and test yourself. Mostly what I like is that I am making progress and Greek makes far more sense to me when I can see it. 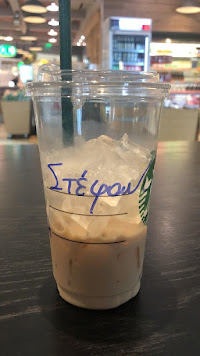 I like chai latte in any language
Now I also watch movies or shows in Greek (with English subtitles). What I'm working on on the side is trying understand the words by hearing them verses seeing them. That's always the hardest part. I learned sign language long ago and while I could sign what I wanted to say, understanding someone's signing to me was the extremely difficult part. So I know it's a process every step of the way to learn a new language. I know it'll take more than Pimsleur, Duolingo, Greek television, and a month or so in Greece every year to make progress. Still, I'm making some slow progress and the daily repetition on Duolingo helps me remember it.
at February 07, 2022