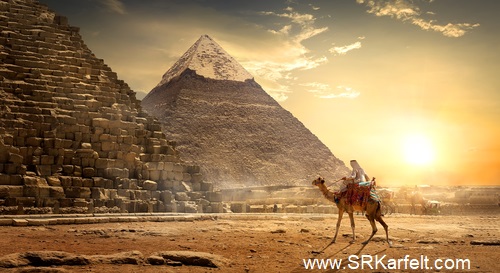 Feeling restless? Wanderlust? Me too. I found a great way to scratch that itch during this pandemic and next time, someday, when I can go back to Egypt, I'll know a heck of a lot more about what I'm looking at thanks to edX.org. I took a HarvardX online course called Pyramids of Giza: Ancient Egyptian Art and Archaeology.
There's even a free version, so you have no excuse if Ancient Egypt is your thing. I've never had so much fun taking a class before in my life. It wasn't just the subject matter either—hieroglyphs, Old Kingdom tombs, and pharaohs. The professor was brilliant, engaging and articulate. I enjoyed it so much I tore through an eight week course in half the time. Mind you, I put way more time into it than if I'd moved at the leisurely 2-4 hours a week suggested.
The Great Pyramids of Egypt on the Giza Plateau are surrounded by tombs. They're underground and unlike the Great Pyramids (Khufu, Khafre, and Menkaure), many are decorated with art. The pyramids themselves are named after the kings who built them, from an older kingdom, and are from a more basic plainer time. When I went inside the Great Pyramid I was surprised at the utter lack of decoration, not realizing it was from a time before Ancient Egyptians decorated tombs so extensively.
The underground tombs in the Giza complex were excavated in part by Harvard's own Archaeologist George Reisner. The class goes over the countries and archaeologists involved in the heyday of Egyptology in a truly engaging and informative way. It's easy to follow and retain, and I daresay, it was interesting and fun. 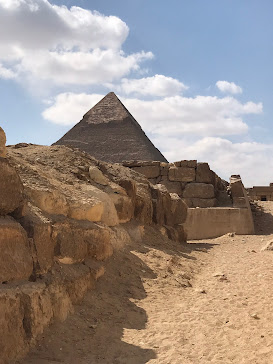 This is a photo I took with my phone in February of 2018 when I was in Egypt. The pyramids are in Cairo, Egypt but located on what's called the Giza Plateau. From this photo you can see some of a mastaba field (mastabas are above ground tomb portions). I did have the opportunity to go down into a couple of the tombs near the pyramids and it was amazing. The underground tombs are from newer kingdoms and rich with painted walls, hieroglyphs, statuary, and are beautifully artistic. Although I wish I'd taken this class first, it still helped me understand more in retrospect. It was my first trip to Egypt and the sheer magnitude of it overwhelmed me.

Being the fiction writer in a group of Egyptologists, I focused on taking in as much as I could and simply experiencing it. I climbed inside Khufu (the biggest pyramid), rode a camel around Giza to the Sphinx, and took endless photos of everything. They tried to educate me on the different kingdoms, dynasties, and hieroglyphs, but I really wanted to prowl through the dusty bookshops, sail in a felucca on the Nile, and score a purse with a camel painted on it. Fortunately Harvard edX showed me what I missed. Now, like the rest of the world's stilled travelers, I wait for the someday when I can resume my hands-on learning with renewed appreciation, thanks to this incredible class.
at December 19, 2020