Oops! I'm Late for My Nineteenth Vestibular Migraine Anniversary! But There's Something to Celebrate This Year!

There is a BOOK. We have a BOOK for Vestibular Migraine. I was going through a spate of them recently. Sitting on the comfy grandma chair in my office, spinning and bobbing, I started googling "Vestibular Migraine Books". When I first started to get these migraines (and I didn't even know they were migraines), the only diagnosis I could get after a year or so of running to doctors, was that, "It must be a migraine variant.".
That was nineteen years ago and they're an official type of migraine now. Why that makes a difference is hard to explain. Maybe we just like to know the name of our enemy. He-Who-Cannot-Be-Named is so much worse. You do not want to show up in the Emergency Room with an invisible ailment. Back in the Olden Days of 2001 I recall having a raging migraine with aura. My vision was totally blocked with various prisms and flashing, while a nurse in the E.R. tried to give me an eye exam...
"Can't you see the TOP LINE?"
"I can't even see YOU!"
From April of 2001 until September 18th of 2001 I had five to six cluster migraines every single day. If it wasn't hell, it was one of the lesser waiting rooms. (Mind you my neurologist appointment wasn't until that October.) An emergency room doctor (after several visits) gave me a prescription for Propranolol. It's a beta blocker with good success as a migraine prophylactic. Unfortunately it made my blood pressure go berserk. (It's a rare side effect.) I wound up self-referring myself to the Cleveland Clinic to see a specialist for a condition called pheochromocytoma. I'd been misdiagnosed as having that condition in my small town. My mad scientist husband thought it was awfully suspicious that I didn't have those symptoms until I started taking those meds.

He was right and he's been insufferable ever since.

No, I didn't have pheochromocytoma. I did memorize how to spell it after that mess. So there's that. What I do have is a body that can't deal with meds very well. Or grains. Or broccoli. When this all started, one emergency room doctor called me a hot house flower. That's not a medical compliment. I suppose it means I'm a pain in the rear for someone who tries to keep me flourishing. Well, I might have a hot house flower body, but I have a tough and stubborn disposition and in nineteen years no matter what amount of Fun House spinning my migraines have thrown at me, I've never returned to the Emergency Room.
Basically I gave up on doctors. Maybe that was bad, but I was getting nowhere and I think my out of pocket medical expenses in 2001 were somewhere around $20K. So, I changed the way I ate to mostly vegan and it helped. The spinning never went away completely, but it got better and I learned to live with it. Still, after all of these years, I can't tell you how thrilled I as to come across Shin C. Beh, M.D.'s book Victory Over Vestibular Migraine, The Action Plan for Healing & Getting Your Life Back.
You can tell by my copy of the book (with all the Post-It notes sticking out and the cover mangled) that I've gone over it many times already. I wrote in it. I teared up repeatedly as I read it because nineteen years of Vestibular Migraine is a very lonely road. 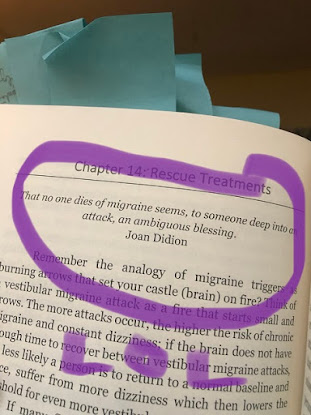 As I read this I nodded my way through it YES! YES! YES! All the things the author said, I could relate to. Many of the triggers and organic solutions I'd figured out for myself. I may be a slow learner, but, hell, nineteen years is a long time. What I loved is how comprehensive this book is. It covers everything. I didn't really understand what a migraine even is or what happens in your brain during an attack. I didn't realize it could be more than one problem—that realization may send me back to a doctor after all these years. But I swear to god if all they do is have me touch my thumb to each finger and tap my nose, it will get UGLY.

Sorry, but you do cluster migraines every day for months while waiting for the blessed neurologist and get five minutes with that and only that, and you'll understand the frustration.

Many of the triggers I'd figured out myself too, including diet. Mind you that didn't stop me from gradually dropping my mostly vegan diet and gaining a bunch of weight back, and kicking the whole cycle into high gear again. That's because I PRIDE MYSELF ON DOING ALL THINGS THE HARD WAY. Also, stress eating. Also, cake.

No worries, I'm back on the wagon again.

If you have these migraines, you have my sympathy friend, and you have to get a copy of this book. It covers everything you need to know AND it's like an empathetic hug while you circle one of hell's waiting rooms.