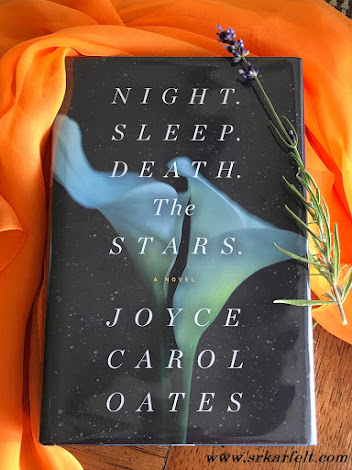 This is the first Joyce Carol Oates book I've ever read. Her quotes often show up in my Women Reading Aloud retreats and classes, and they spoke to me.

“Reading is the sole means by which we slip, involuntarily, often helplessly, into another's skin, another's voice, another's soul.”

That quote is the perfect illustration for why I wish that Night. Sleep. Death. The Stars. hadn't been my first Joyce Carol Oates book. Eight hundred pages was far too many to spend inside the heads of these characters.
There's no doubt that Oates is a gifted writer. Her style reminds me of Anthony Doer, though Oates has been at this much longer than he has. A chapter might be only a page, or it might be what feels like countless pages. However she writes (and there were many asides in parentheses, which didn't bother me at all), she knows how to tell a story. What drew me into this story was how incredibly current the topic is.
It begins with a man called Whitey McClaren. He is a man of some rank and distinction in his small town and used to be the mayor. He's driving home from a meeting and sees the police beating a dark skinned man along the side of the highway. Shocked, Whitey stops to help. The police beat and taser Whitey until he winds up in the hospital with a massive stroke.
The story is told in omniscient form. That means we move freely and deeply through the minds of each character. We go from Whitey's head, to his wife, Jessalyn, and painstakingly through the heads of each of his five children: Thom—an apparent psychopath, Beverly—an incredibly petty and horrid woman, Lorene—a high school principal who is like the meanest paranoid mean girl who ever got to be in charge, Sophia—an odd duck who kills and dissects lab animals for a living, and Virgil—a gentle granola soul and closeted gay who fully expects his brother Thom to kill him at some point.
What drew me into the story (though I'd begun it and set it aside as not being my cup of tea), was that I kept thinking about the first couple chapters and wondering what happens. That's good writing. Like Jessalyn, Whitey's widow, I've been in a long term marriage and can't fathom what life would be like if I didn't have my mad scientist husband making me nuts at every turn.
On some level I must have needed to suffer alongside Jessalyn. She's a kind-hearted woman who adored her husband and blindly loves all of her children. Other than her husband and family she has nothing and no life or interests of her own. She exists to serve them.
WARNING: This is going contain spoilers. It already has because I've told you that Whitey dies.
No one would have known what happened on that highway, except that when Whitey stopped he saved the life of the man the police were beating. That man is an Indian doctor named Azim Murthy. He contacts Thom, the oldest son, and tells him what happened.
Thom files a lawsuit against the Hammond, New York police department. Whitey has been cremated and there's no evidence other than some photos Thom took with his cell phone, because of the discrepancy in how his father looked in the hospital compared to what the police had said happened. Thom, the apparent psychopath, is removed from real human connection and the time spent in his head is horrible. I spent the entire novel waiting to find out what awful thing happened to Thom and his siblings to turn them into such a dysfunctional lot when they had loving parents and a good home. It came as a shock that nothing happened. They were just that way for no particular reason.
I don't buy that, and I do appreciate all of Oates storytelling skills. A novel that delves so deeply into the human condition and takes me along the thought processes of the entire McClaren clan raised my expectations. I trusted and followed each word but in the end I can only salute Oates' brilliance while not appreciating the story at all.
The children were all detached and mostly cruel. Lorene as the high school principal actively hates everyone. She changes school records to make sure students she thinks laugh at her don't make the colleges they want. Thom goes after the one character in the book I liked, the stray cat that Jessalyn called Mack the Knife. He's a ratty feral nightmare and Thom waits outside for him and beats him to death with a bat—don't worry, he inexplicably doesn't get the cat and later we're told it was a raccoon. After that the cat basically vanishes from the story. Thom also, before discovering that the town is settling his lawsuit, beats one of the cops to death with a bat too.
That's not normal behavior. I hated the cops that beat Dr. Murthy and Whitey too, but you don't get to commit such premeditated vigilante justice without some damaging character flaw along the way. Thom's was never explained. It comes across as boys will be boys. He apparently gets away with it too.
After a suicide attempt, Virgil is still alive at the end too. It's open-ended on whether Thom will decide to kill off his little brother as Virgil expects. The story didn't end so much as stop. Jessalyn gets an artsy interesting boyfriend who takes her to Galapagos. I kept getting pushed out of the story at this point, because it didn't seem to want to end. I had to go back and reread the ending because I wasn't certain if Jessalyn was dying as she sailed off into the sunset, with the new man who's bringing purpose to her life, or if there was a profound revelation at that point. I'm still not certain, and if there was a revelation it escaped me. If you want to read it and explain it to me in under eight hundred pages, I'd be happy to listen.
at September 19, 2020