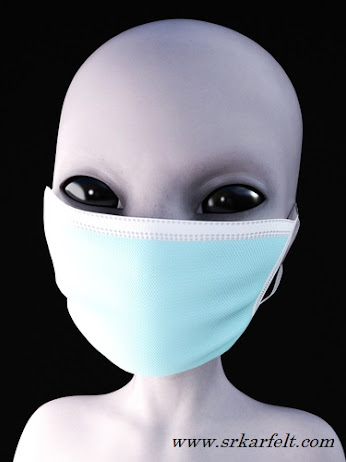 You know how it goes. You're masked up. There are four tiny bottles of Bath & Body Works hand sanitizer in your purse. You're fine. You don't have a fever. Yet you cough, like an inconsiderate festering petri-dish of end time germs, you cough in PUBLIC. Heads swivel like that alien invasion movie where everyone has been taken over by aliens except one person (who just coughed). They all point at the violator and make that high-pitch alien whine sound. GET HER.

Moral of the story: don't cough in public. I don't care if you have to swallow your tongue to avoid it.

It's allergy season here in the shire (it runs April to December). Histamine is the only thing running through my veins (does it run through veins?). I'm now allergic to all life on earth. My sinuses are Death Valley dry. It's a bit worse than normal Sjogren's Syndrome, but honestly, you can get used to about anything. So, I volunteered to watch my favorite little person, Three, though she has a cold. It was totally worth it because we made a cooking show (pretend) out of a bag of gluten-free flour and water. (Yee-Um.) Priorities. Everyone in the family caught Three's cold. She's a total carrier monkey. I wasn't sure if I had it for sure but it looked bad because a couple days after she left, I sneezed once. It came out like a gust of wind in Egypt.

Without getting into too many gory details about sinuses—I was having difficulties. Despite the pandemic, I decided I would go see my doctor for my annual physical. I wanted to tell her about my desiccated dryness. Hubby kept insisting I wiggled my nose non-stop, like Bilbo in The Hobbit. (Can't help it, but I denied it.) The best thing about mask-wearing is that no one else can see that so he has no proof.

Then I remembered that last year when I complained about dryness the doctor said buy a vaporizer. Oh, yeah. Fact is I bought two of them. Apparently you have to turn them on. You also have to put water in them. (Ain't got time for that sh—.)

Deciding that before I showed up for my physical having not done what she told me to do LAST YEAR, I turned on both vaporizers and put them at face-level with water in them and everything, and I went to sleep.

In the morning I woke up with a fever and a hacking WET cough. (Not a COVID dry one, but a fever and a cough makes you suspect!) I spent the day hacking and lying on the comfy recliner in my office and befouling tissues, figuring I'd rehydrated some kind of a mummy curse or something.

Someone said the word COVID test to me. First I said, it's a WET COUGH and I don't have COVID! Then I thought, but WHAT IF...and my writer brain ran with it. Like most of my first drafts, it was awful. (So many plot holes, like where did I catch said virus?) Even then I may have been able to ignore that niggling doubt, but I'm to watch Three again in a couple of days and IF I have IT, or even maybe could possibly have IT, they won't let me. What with her magical carrier monkey abilities, she could infect the entire planet in the time it takes to make one pretend cooking show. Plus, I have leftover water balloons, powdered chalk, neon sidewalk chalk AND grand plans.

Anyway, the county I live in was doing free drive-by tests.

Only, the drive-by testing site was full up for the day. So I coughed myself to sleep, vaporizers blowing at me, a fan swirling, and a hat on because maybe I was hot, maybe I was cold. I couldn't decide so planned for both.

In the middle of the night I woke up because I realized how to fix a problem I was having in the Viking book I'm writing. Also, then I realized I wasn't hot or cold or coughing anymore. I checked my temperature and it was below normal, which is where I live. Below normal.

No COVID. Absolutely nothing. The mummy curse has left the building. All is well. And you were so worried. Again.