The Consuming Chaos of Cairo—Welcome to Egypt


Welcome to Egypt. This isn't going to be like anyplace you've ever been before.

No photos can ever give you a true depiction of a place. It's difficult to capture the smell of dust, the feel of it on your skin, the magnitude of 9.5 million people in one city, the ancient co-existing with the modern, the Nile oases in a desert, the startling wild traffic, but I'll do my best for you.

Egypt caught me by surprise. My research, prep work, and YouTube videos couldn't prepare me for the sensory overload that is this land.

So much of Egypt is ancient and dusty and disorganized, yet it may be the most spectacular place I've ever been.

The people are lovely, kind, and polite.

Arriving in Cairo at night I peeked through the curtains of the minivan windows while we sped down a highway. I saw sights that I've never seen before. Cars parked alongside the freeway. People stood in groups, talking, smoking, eating. They crossed the road. So did children and dogs. If there were lanes, they were ignored.

Eventually I'd find the rhythm of the city. Horns never stop blowing, but after a while they don't sound angry. They mean things.

I'm coming alongside you.
Watch out I can't stop.
Do you see me?

That first night, that first week, I didn't see any order. Concrete barriers crumbled along the roadways, some buildings and roads appeared to be in similar condition. Ribar juts into the sky atop buildings, many don't have glass in the windows. (Later I hear that taxes aren't due until construction is complete. Tax law affects construction in many places.) Clothes and blankets hang over balconies. Raw meat dangles in the open doorways of butcher shops. So do bunches of bananas and bags of oranges. Donkey carts pull wagons of brilliant tomatoes or alfalfa. Trucks are piled sky-high with sugarcane. There are camel riders sharing the same roads in places.

Some people dress in western clothing. Most women cover their hair, some wear burqas. Adhan sounds.

The call to prayer reminds me of the chanting of monks at monasteries, and I find it as beautiful as Egypt. It's not like anywhere else I've ever been.


It took me a week to adjust to Egypt.


Vendors at the pyramids do not take no for an answer, but they never stop smiling. Where you from? Welcome to Egypt. This is your home now.

The tourism isn't as slick and polished as most popular places. (Rome, London, New York.) That's not a bad thing. Marketing takes a far backseat to the genuine reality of Egypt and her people.

Breathe and take a good look around.

Don't be rude to souvenir sellers. No, thank you. La'a, Sho-krun in Egyptian Arabic.

They won't accept that, but be firm when you mean it.
Buy stuff from them. You have no choice anyway. Figure out the Egyptian pound conversion to your currency before you go. Right now a hundred pounds Egyptian is about five pounds British Sterling, about seven dollars fifty-cents American.

Splurge! You'll enjoy your dusty trinkets when you get home!

Even the camel ride is going to be different. You don't just pay for a camel ride. You get to know the camel guy. Your people talk to his. Where you from? You negotiate price. How you doing? You meet the camel guy's cousin. He meets your friends. You're family now. It's a good thing. His son will help you when you turn the camel in the wrong direction and wander through some tombs. Get comfortable on that camel, you're going to be there some time. It's higher than you expect. Don't worry. It's going to be a great day. Inshallah.

Inshallah. God-willing. Things happen as we wish, or they don't. 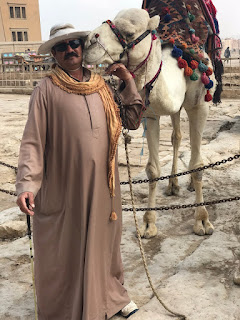 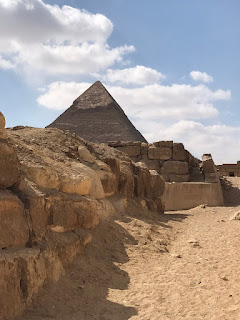 Your camel's name is Moses. You kiss him.  Come on. Have some fun while you're here. Just choose the camel you're going to kiss wisely.

Negotiation takes time. More time than money. Everything here does.

Welcome to Egypt. This isn't going to be like anyplace you've ever been before. Isn't that wonderful? 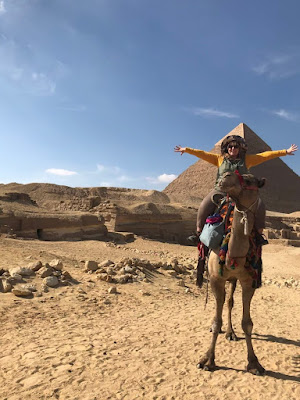 Isn't that one of the reasons you travel? I hope so, because you have no choice. 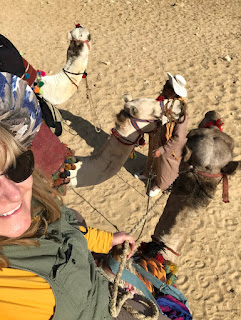 Suddenly the pyramids can become exactly what you'd imagined. You're out of sight of the buses. There are camels and horses galloping around you. There are expanses of desert here. You're doing touristy things, but you might have slipped into an old pocket of time. There's a slowness in Egypt that I've never experienced anywhere else. It's a chaotic slowness which is difficult to explain. There is always a lot going on, but you don't need to hurry.

While in Cairo my study group stayed within walking distance of the pyramids at the Mena House. The conversion rate is so against the Egyptian pound that we could afford it. The Mena House has been around since the late 1800's. Many people in recent history who visited Egypt stayed here. Peace talks in the middle east happened here.

The Mena House is a compound. You don't just drive in and out of this hotel. Bomb sniffing dogs check your vehicle, armed guards watch. This is Egypt, get used to it.

Most importantly, don't be afraid. It's highly unlikely you'll even get pick-pocketed in Egypt, but don't be stupid either. It's a very safe, very family-oriented country. Prepare to fall in love with this land.


I fall in love so easily, with places, with views, forests, seas, and yes—with camels named Moses. My foray into Egypt took place in February and March. It wasn't quite dust storm season, but the dust is intense. From Alexandria to Cairo to Luxor it hung on the horizon (Cairo more so than the other places!). It lands on everything, including you. It can make you cough, a lot, but to be fair I spent most of my days traipsing the desert and crawling through tombs.

This was one of the most intense trips I've ever taken. I'd go back in a heartbeat. Take your sense of adventure when you go and leave your expectations at home. You'll love it when you open your heart to it, I promise.