Mama Mia, How Can I Forget You? Skopelos, Greece 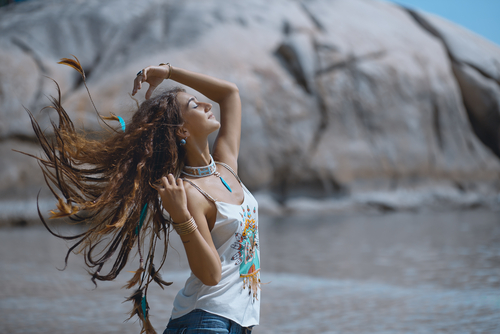 We took a ferry to the wrong side of the island. That meant negotiating a taxi ride. In Greece not every cabbie will accommodate you. It's a thing where they'll often drive by and you kind of shout where you want to go through their window and if they feel like taking you there, they'll take you, or they'll keep right on driving. Don't take it personally.

Walking up to the taxi stand we stated our destination, Agio Ioannis, and the driver sighed and shouted, “Mama Mia!” to the other drivers. I had seen the Mama Mia movie a couple years ago and had no idea it had been filmed in Skopelos, nor had I made the connection to Agio Ioannis. I joined the group going to Skopelos because when I wrote a recent novel I randomly chose it as a refuge for my shieldmaiden assassin. For me it was retroactive research.

Our taxi driver hadn’t had much sleep the night before and being inundated with a pile of perpetually cheerful female writers seemed to do him in. He asked what kind of car I drove and left me forever self-conscious about saying the word “Wrangler” with my American accent. We might have also called him The Nazi instead of Thanasi with our American accents, but mostly because he threatened to kill us at least three times.

The road to Glossa is full of hair pin curves and the driver talked with his hands. It was a memorable drive. Little shrines dot the highway. We assumed they were shrines to Thanasi’s previous fares, but a native later told me they’re actually a type of thank you to guardian angels from people who’ve had accidents there and survived.


Agios Ioannis is a church on top of a tall outcropping of rock. However people managed to build it up there is a testimony to the human spirit. It’s spectacular. The hike up is a blast, going up paths and stairs. The view from the top is breathtaking. The Aegean Sea is so clear and the color of it from above talks to your soul. My cheery group of writers were the only people up there and we practically danced around examining every aspect of it.


One of us may or may not have moved the boards to examine the ancient outhouse (a hole in the ground, sorta hanging off the island), and if it had been me who decided to use this facility I’d never admit it even if there are technically photographs, because writers have some seriously messed up senses of humor. No wonder Thenasi threatened to kill us so much. We kind of felt the same way about him when he harshed our Aegean commune with nature by laying on the horn down below. (He’d only allotted us 30 minutes.)


After our day at the Mama Mia church (and no tourists or taxi drivers killed anyone) I later returned to Skopelos solo. My goal was to find the café and house I’d chosen for my main characters from thousands of miles away. It’s not too difficult to find a white house with turquoise shutters in Greece, but this one needed three stories so my assassin could jump from the balcony to the street below—and really freak her husband out. This is the type of realistic detail that can occupy the writer mind indefinitely. It’s why we play so well all by our onesies. Sure it’s fiction, but it needs a basis in reality.

Getting lost in the labyrinthine alleys, tackling never-ending stairs and wandering the backstreets of Skopelos was heavenly. I’d first spotted Panagitsa of Pyrgos from the port when my ferry stopped briefly at the island weeks before, now I had time to examine it up close. My hours were spent wandering to the places I’d only gone in my imagination with my characters as my avatars. It turns out that Google Earth is an incredibly accurate research tool. It was still a thrill to light candles in Saint Nicholas church myself, and stop at a juice bar that my clean-eating Carole Blank would have approved of.

One of my tasks was thwarted. My To-Do list for Skopelos included trying cinnamon ice-cream, which might be the only commonality for the couple from my book, but the only place I could find that had it (gelato is far more popular) was once again on the other side of the island. I went to the taxi stand, and guess who was there just waiting to harsh my quest? Yep. Thenasi. He said he’d take me over for a price way beyond my ice-cream budget. I have a feeling he might have recognized me.


Instead of cinnamon ice-cream I tried a rice dish full of shrimp still wearing their feelers and eyeballs. My table rested against a case full of ice and a blackfish about my size. I decided to spend the rest of the trip sticking to the safety of Greek salads and the to-die-for yogurt with plums. Besides dark had fallen, the moon lit the sea, the last ferry of the night backed into the port, and my next research project awaited on a different island. Open-Air Cinemas are popular in Greece and a local one played Mama Mia a couple times a week. That might be outside the technical definition of my book research, but wouldn't you have headed that way too? Besides, just watch me use it in a novel.