Greece All By My Onesie

Beaches have never been my thing.

Not beaches, not islands.

But Greece has won me over.

Right in the middle of insolvency and political messes I've fallen in love with the one your mother warns you about.

Today I hiked to one of the rocky beaches I can't pronounce to lie around, write, maybe snorkel a little. I stopped on my way and bought a pot of basil for the balcony of my pension and a two-piece swimsuit that I'd never wear among the witnesses of my own country. But I'll do it here. Hell, I'll take a potted plant to the beach with me here.

My skin hasn't been tanned like this in decades. It isn't something I pursued even here as I spent my weeks writing and evenings hiking, but the sun and sea broke through my resolve and 50 SPF sunscreen, although in that two-piece I'm sporting the whitest mid-drift in the Aegean.


Yesterday I determined to hike up the donkey trail to the Old Village. Seems most every island here has one. It's called Hora, which I think most are, and sits on a high peak at the end of the island. A white walled city bursting with brilliant flashes of color, bougainvillea blooms, turquoise pots, lilac trim. My fellow writers and traveling companions left--painfully pulled back to reality. Only I managed to stay on, demanding more time to investigate rocky coves, to ferry to other islands, to write and explore new paths.

Even though I had no clue where it was, I have Google Maps!

What could possibly go wrong?


Of course I got lost. It was something I suspected when cars and scooters passed me on said donkey trail, but I knew for certain as I stood in the middle of a chicken coop in some farmer's backyard. The weathered elderly gentleman spoke as much English as I speak Greek. We really wanted to talk too, and we both tried. He insisted I was British. A logical conclusion since it takes an American about three flights, a ferry, and three days to get here. In the end we straightened that out and had a long talk about his time in San Francisco. I think. It was all in Greek.

He offered to drive me to Hora--which I pronounce miserably wrong--that was very kind, but I was hiking DANG IT. So he helpfully pointed to the hot sun hovering over the forested hills to the west and said, "Follow the sun. You can't miss it."

Seriously? Is that legit lost advice? I swear on my heart's blood I can miss it.


If you think you can't get lost on an island you must not use Google Maps. I elected to trust my farmer and follow the sun, even though it has no path. I plowed through weeds, brush, and trees, not thinking about Greek ticks and snakes or ancient open pits hidden under greenery and full of tourist bones, or even about wayward travelers who get dehydrated in the desert no one can hike across on half a bottle of water, or those eaten by a bear because they inadvertently got behind the wrong fence. At least I didn't think about that stuff much.

The writer brain is a double edged blade. We get paid to come up with the worst and most unlikely scenario you realize? 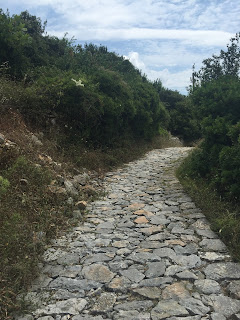 But before I even had to open my Wikipedia app to check out the likelihood of Greek snakes and alleged bears, I stumbled onto a donkey-sized cobblestone path. After that I just followed my feet, which is really the only app or map a meandering wanderer needs isn't it?

All's well that ends well, right? Especially when you're in love. This is what a donkey trail looks like, for those of you who do use Google Maps.

Did you fall in love with a country this summer? Let's chat about places we love. Anyone else hopelessly in love even though it could never work out?

I'm here to commiserate with you, in Greek even.