Once Angel wore a costume reflecting her nickname, only there was a devil tail sticking out beneath the snowy white fabric. It was super cute, but sometimes I think quite appropriate. 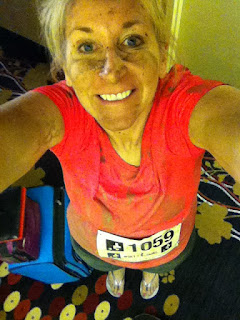 Running a 5K has been on my to-do list for awhile. It isn’t that difficult for me to run three miles, but I am a leisurely runner, and never put much effort into running at a more respectable race pace. My buddy, Angel, suggested we run the Dirty Girl 5K Mud Run together. I figured it would cross something off my list, and the idea of playing in the mud appealed. I don’t know what I was thinking.

I practiced running outside somewhat erratically the weeks before. Angel on the other hand got swamped at work, and had a vacation coming up. She didn’t have time to practice at all, said that she was going to let the race train her. Since she’s barely of legal age, and I am quite legal, I figured we were well matched with this type of training plan. I intermittently ran too much (and then spent days not running and whining how much it hurt) and Angel went off on a cruise to Mexico.

Race day dawned bright, sunny, and unseasonably hot. There was music, DJ’s, and crowds of women. Lots of pink running clothes, lots of tutus, and feather boas. Angel and I had gone in fashionable hot pink, but practical spandex pants. (Spandex and synthetics are the choice for mud runs, mud adheres to cotton, causing it to expand and sag. If you want to keep your clothes on, I’d suggest synthetics.)

The Dirty Girl posts your pictures automatically to social media, even while you’re still running the race. You can opt out of this feature, especially if you wear cotton clothing. One team wore diapers, I kid you not. Fortunately I did not see them once they hit the mud, but if you’ve ever seen a wet diaper, you may see the problem. I have no idea how they finished the race having surely lost their diapers in a mud hole somewhere.

The afternoon races were far too crowded to run more than a few steps now and then. The ground was muddy as we began; just a few puddles and soft spots, easy to maneuver around. I was determined to keep my shoes dry for as long as possible, to ensure easier running. There was a bridge to crawl under right off, easily done in a squat, but then we hit the first real mud. Black, thick, and heavy, it was the kind that would suck your sneakers right off your feet. In fact it did just that to several women who braved going right down the middle. I cheated and went along the sides. Angel got ahead of me. She made a beeline straight through the middle of everything and somehow managed not to lose her shoes. 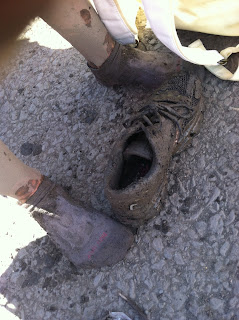 Then we hit the first serious puddle. It was more of a pond. The muddy water came up over your shoes, and Angel grabbed my hand and dragged me through the worst of it, ensuring soaked shoes for the rest of the race. The next watering hole had no way around; you had to go straight through. There were thick ropes tied overhead to hold onto, and we soon learned why. It was above waist-deep and the bottom was littered with rocks and wood. It was necessary to hold on so as not to trip. This is where your cotton pants would become a big problem. After crawling out of that hole, we hit a patch of slippery, slick, wet mud. Running around a corner, I lost my footing and went down. The other women are terrific. Anyone who falls or gets hurt gets a hand up, and encouragement to suck it up and continue. I loved it.

Obstacles were placed at regular intervals. The first was a big blow up slide. You climbed over big bumpy pillows to reach the top, and then slid down the far side. There is the option of going around all of the obstacles, and signs directing you around them if you chose. This way you can pick and choose what you will dare, and what really isn’t a good idea. Angel had already announced we would do them all or perish. Or maybe that was my idea. It was decided upon ahead though. So we just did it. There were climbs down steep hills (with ropes) and then up other hills, and pits of mud to go through – some thin, some very thick, some deep, and some not so bad. A few tunnels had to be crawled through, and the mud was full of little rocks, so you felt it. Angel cheated, you should know this, I was crawling through a tarp covered mud pit and looked to my right and there she was, crouched low into a squat and managing to walk through it. I was annoyed mostly because I hadn’t thought of it first. After that I followed suit through the tunnels. I didn’t mind the mud, just the rocks.

Almost a mile in and Angel’s clothes were still pristine. Mine weren’t. So I baptized her with muddy handprints. Going through a maze of string appropriately called “Cat’s Cradle” you had to climb over and under giant webs, I got stuck a little. There was also a giant wall of criss-crossed rope that you had to climb up, ring the bell on top, and then climb down the other side. At the mile markers were water stations for drinking, a welcome sight. The biggest obstacle was a giant water slide, but with mud. It was huge, and we couldn’t see the women going down the far side. We could see very athletic women reach the top, and then backtrack down the way they’d gone up. Uh oh. Angel and I looked at each other. She told me to wait while she scouted out the far side, when she came back she said it was a one-time dispensation from the do everything rule, if I so choose to chicken out. She didn’t say it like that exactly, but that is what it felt like.

I decided to at least get to the top and consider it. By the time we reached the top, I was in my ‘just do it’ mode. (In hindsight that was a bad motto.) There were misters at the top, blinding you a bit, but the slide went down into a pit of muddy water at the bottom. There was no doubt, this was gonna hurt. We were instructed to lay down, cross our arms over our chest, and our ankles, and not to try to catch ourselves at the bottom. I obeyed. Angel did not. I plowed into that water at an impressive speed, and how do I put this delicately? Let’s just say that Poseidon had his way with me, at least briefly. It was a rough landing and there were also teeny rocks all along the bottom to slide through. I bruised my tailbone, and three weeks later things are still black and blue in all the wrong places.

After the race the lines to shower were very long. Angel and I decided to go to the hotel to wash up. I worried they wouldn’t let us in, but they did. When I finally stood inside a shower and peeled my mud-infested clothing off, about two cups of little pebbles scattered into the hotel shower. I have no idea how they got inside my clothes. We'd donated our shoes at the end of the race, and tossed our socks into the trash. Nothing would clean those, but for the most part all clothes were ruined. We’d planned for an epic dinner, at a nice restaurant. What we ended up doing was lying in our hotel beds and ordering pizza delivered to the room.

All in all it was a blast, I loved it, and we plan to make it a yearly event. In fact, if anyone is up to it, I’d do it again this summer. Are you in?


What is the dumbest fun thing you’ve ever done? I’d like to hear about your adventures too!