Comrade cannot bear to have her neck touched, a fact which delights all those near and dear to her. She seizes up and makes very distinctive and admittedly amusing sounds. It is a very public Achilles heel, easily accessible whether she’s lecturing a kid, or singing in the choir. A gentle touch against the neck and she curls up like a pill bug and emits a noise something like an inward sneeze. If squeaky toy manufacturers could replicate it, they’d make a fortune in Chihuahua sales alone.

Angel is into extreme sports. I’m talking sea-kayaking in some of the roughest, shark-infested water on the planet, cliff-climbing, bungee-jumping, surfing, sky-diving and crawling through pitch-black, unexplored caves with a flashlight clenched between her teeth. I’ve seen her lean against the glass wall of a skyscraper, looking down at the city below, and say, “I would love to be able to jump this.”  The woman is fearless. Unless you look her right in the eye, lean towards her and say, “Rawr.”  She cries. Oh, she laughs while she cries too, but it creeps her out every single time. I don’t mean shout it either, I mean a conversational “Rawr”.
George is a big, burly lumberjack, He-Man, Master of his Universe kind of guy. Fells trees, hunts animals that can hunt back, a general nuisance in public places while fearlessly (and loudly) defending his habits, hobbies and opinions. If a baby or child excretes anything in George’s vicinity, George gets sick. Once Mrs. George explained his sad condition to me, I did not buy it. Certain that this was George’s way of escaping less than pleasant tasks, I decided to test him. It wasn’t pretty, talk about an experiment gone awry. I’ll spare you the gory details beyond I believe him now.

Maybe it says something about me, that I keep this mental list. I like to think that it is a writer thing. Mostly. In my defense I have never touched Comrade’s neck, nor said “Rawr” to Angel. Still, I am not above playing with kryptonite when it amuses me. Dear Hubby worked in electronics for years, so he’s highly sensitive to being shocked, because it’s happened so many times. At least once a winter I’ll zip through the house in my wool socks, and discover the air is nice and dry and everything I touch will spark brilliantly. Even though I know that the penalty will be grave, I still have to do it. Yep, I sneak up behind my kind and patient husband, and touch his ear. He’s a very forgiving man, but even if I end up outside in the snow, wet, it was still worth it, and I can’t even say why.

Maybe it is going out on a limb to say that most of humanity probably shares a top ten list of things that creep us out, though the movie marquees at Halloween tend to back up this theory. I’m not referring to those creep-outs. I’m talking about those little peculiarities we harbor as individuals. The elderly person who wears her shirts inside out because she doesn’t like seams touching her, your friend who can’t watch you put in contact lenses because it creeps her out so much (and you never say, “What’s this?” and touch your eyeball when she looks), or the kid who is so ticklish that you can’t put socks on him without a wrestling match. What is your particular or favorite little creep-out?  Feel free to rat out your family and friends if you like. 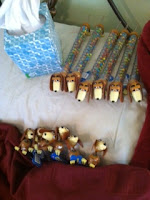 The Epic Slinky Dog giveaway continues here at The Glitter Globe. I can tell you Slinky Dog’s creep-outs. There are two, hot-dog buns and that springy sound his tail makes if you keep messing with it. If you’d like an Epic Slinky Dog of your very own, leave me an awesome tale of a little creep-out (and follow my blog) and maybe I’ll send you one. Be sure to check back, to see if you won!  I post winners in the comment section.
at October 26, 2012