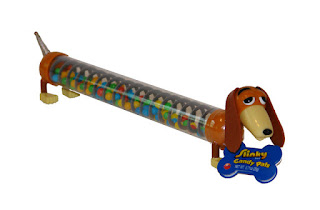 The Epic Slinky Dog Giveaway continues!  Leave a blog comment. Every time I get five new followers, I draw from those who left a comment. They're going so fast - well - fast as Slinky Dogs can go.  Okay, that's not very fast, but two went out just this week!  Woo-hoo!
at August 09, 2012