Queen of the Bohemians 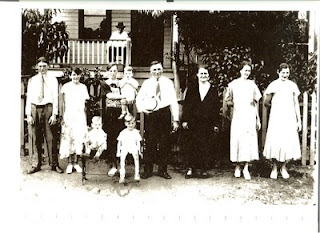 (Third adult from left with the first three of her menagerie)
﻿

Today is Babushka’s 101st Birthday. She would dearly love a party too. It would need to involve all 1,034 members of her immediate family, including the Icelandic tribe, the gypsies and even the wolves would be welcome on this special occasion. Gram never could resist a pet, which is how Gomer survived the repeated assassination attempts on his wretched, wicked, monkey life. She was his bodyguard. My husband used to say that if Godzilla came thundering through the backyard that Gram would run outside and try to feed him something.
I suspect that is true, and if Godzilla refused whatever she was forking up towards his roaring, toothy mouth, he’d be in for some serious reptilian smack down. Babushka didn’t take any back talk from anybody, not from her demonic little monkey and not from any of her dozens of grandchildren or even from any of the mess of changelings who wandered into the fray and stayed. We kept our wisecracks to ourselves and we ate whatever was plopped down in front of us, which was often wrapped in cabbage or looked exactly like the severed limb of some porcine beast to which it had once belonged. Even her cake looked like it contained thousands of dead ants, but we all learned to love poppyseed cake and I admit I carried on the tradition and force fed it to my own children until they succumbed to the tastes of their ancestors.
﻿Babushka was a mind reader. At least that was the rumor. As a young child there were many times my cousins and I huddled in the pantry, sneaking forbidden cookies that were for Company, knowing that Gram’s prophetic powers would pinpoint exactly who took the first bite and who had masterminded the heist. We lived on the edge though, ever hopeful that we could pin the crime on the monkey. Gomer, however, wicked familiar that he was, ate his share of the cookies every time and then ratted us out with evil monkey screams while simultaneously cleaning all evidence of crumbs off his fur with a demonic glint in his shifty monkey eyes.
It never did occur to us, until we were parents ourselves, that anyone who has borne or raised hordes of children does not have to be psychic to predict behavior. The sun rises and sets every day and you start to expect things. From baby to teenager it was mathematically impossible to cough up a behavior or crime that Babushka hadn’t seen in the Bohemian herd at some point or another. Gram might have saved time by simply taking a good look into the eyes of anyone of her progeny and starting each day by tucking guilty children into corners – but believing whole heartedly in free will, she had the grace not to inflict preemptive punishment.
So here’s to you, my Bohemian Gram, for stuffing Glitter into the Globe even when I tried to run away; for never turning your back on any child or animal  (she fed the skunks) for not even understanding the concept of being inconvenienced. You truly are the wind beneath my flying squirrel wings.
at September 16, 2011