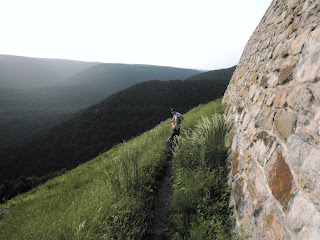 The Road Less Traveled is an excellent place to take your niece and nephew when you babysit them. Except for the poison ivy and the snakes, it makes for an excellent hike. Just don’t joke about running out on the hang gliding ramp, because eight year olds think you’re serious. Don’t sweat it; I tackled her before she got to the edge.
Four wheeling through the forest on dirt roads at midnight was a big hit with the kids and their grandmother. We hit every single puddle, got hopelessly lost, and turned the music on full blast – but for some reason we didn’t see any wildlife. It was probably because we let the eight year old pick the music. I have reason to believe that bears like my tunes.
﻿
When was the last time you had calloused hands from playing Frisbee?  It had been awhile for me too, I’d completely forgotten Frisbee blisters. We played tag in the evenings and I taught them the Cool Aunt (read; these are not my kids, I’d never had taught my kids this game) version of tag. That’s the one where you play by a mountain stream and take a mouthful of water and chase; tagging with hands or water counts. Grandma lost. Boy was she MAD. Thus Spit-Tag was born.
After playing in the mountain water, we decided it was necessary to swim in it. Now comes the part where Cool Auntie has to suck it up and get in that ice water with the kids. It was a blast. After about twenty minutes you can’t feel your body anymore, so it isn’t so bad. We got out after my nephew lost all feeling in his hands. No worries, it came back after a few hours. 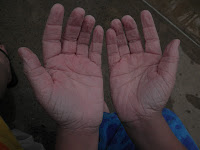 ﻿
As I sit here rubbing cortisone on my mosquito bites covered in poison ivy with my blistered hands, I’m contemplating the road less traveled by. It has made all the difference, but you might want to dress for it. 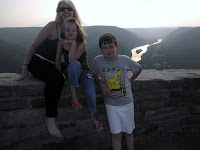