One of the things that inspires me to stick with learning Greek is my food allergies. Failing to communicate what's safe has left me eating eggs and fruit in my room more often than going out. Most Greeks speak English but I find that going off script when ordering food can lead to a variety of complications. It's the same thing when ordering in the USA, so it's not so much a language issue.

Despite my food allergy spiel in any language, more often than not my food will arrive with a big hunk of bread plopped right on top or worse, hidden gluten. I have a severe gluten allergy. It happened again right after I got home from my annual trip to Greece. At that point I was so sick of the hassle that vowed never to eat out again and to always carry a tin of beans in my purse with me. I was more serious than not.

My first few years of trying to learn Greek was with Pimsleur, a conversational language program. It helped me learn basic words but I am a very visual learner and it wasn't until I added Duolingo to the mix that I really began to understand. Plus being able to read Greek has been so empowering. In Greece this year I found myself listening to people speaking, trying to understand them, watching the news, and reading signs and menus. It was a delight. Plus I found gluten free bread and crackers in the supermarket! I couldn't wait to tell my celiac friend when she arrived. 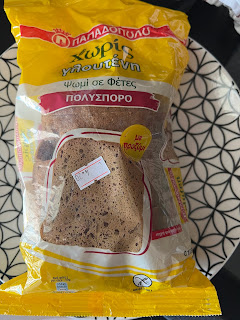 Gluten-free bread falls apart in any language but toast!

An online polyglot said speaking languages isn't something some of us can do and others not. She told me you get out of it what you put into it. That's when I started putting a couple hours into it daily. It quickly made a huge difference. I'd also read somewhere that after a certain age we can't really learn another language. I may not be inherently gifted at learning languages but I am an incredibly tenacious human being. I'm learning Greek the same way I write books, always working on it and never giving up. 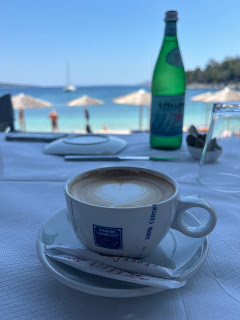 Why does cappuccino taste better in Greece?

This summer I could greet people, find where I wanted to go, order at restaurants, and hunt for things in supermarkets in Greek. It was a thrill. I'm not good at it. And here's the thing about trying to speak in a new language, you look like an idiot and you make mistakes and people really laugh when you mess up. But even when they laughed they would usually engage, correct my pronunciation, suggest clearer phrases, ask me to repeat it to their friend so they could laugh too, and at restaurants if they didn't know what had gluten or what didn't, they'd have me talk to someone who would. 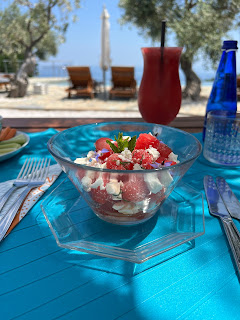 Several people took the time to write things down for me, or tested me insisting I speak only in Greek to them. This year I didn't even get glutened in Greece once. I was so pleased. The Mediterranean diet has a lot of naturally gluten free foods, vegetables and seafood galore. I've still a long way to go but I'm slowly beginning to reap the rewards and already thinking about what language to attempt after this! Though I attended Duocon online and they've got a math app coming out that has my attention too!