FOMO Has No Power Here—Happy in My Now 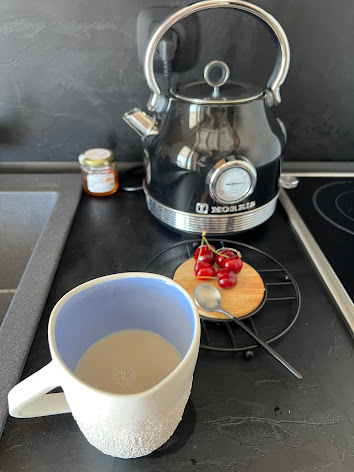 Once a newly graduated student admitted to me in a near-whisper, I have no interest in travel. Is that weird? It's amazing I said. Being content is highly underrated in the marketing world.

A cup of tea right where you are is perfection.

Yesterday I fell into a hole on YouTube. I'm a solo traveler and I watched video after video of the adventures of other solo travelers. One that really got me was a young woman who planned an empowering and romantic trip to Paris all by herself. By day three she missed her cat and teared up when she talked. Trying to talk herself into the beauty of the city wasn't working. It made her sad. The old mom in me wanted to hug her, wanted to whisper, you're still seeing the fantasy you've been sold. You're seeing what you're missing and not what you have.

I left no comment. There are things we all have to figure out for ourselves.

My solo travel is a choice. I have a perfectly good husband who has no interest in seeing the places I like to go to. After our centuries of marriage I began traveling solo so I could see the places that always called to me. I've no desire to see the whole world. Every year I go to the same islands in Greece. I write with the same group of women. I lay on the same beaches and float in the same sea as last year.

Once I stayed longer in Rome, forfeiting Venice—which I've yet to see. I've never seen Santorini, Sifnos, Paros, or Crete. Over the accumulating years I've willfully missed much. To again lay on hot stones at Leftos Gialos or the Port Beach on my favorite island. Again, this year, I didn't take the ferry to Skopelos, preferring to stay afloat in the Aegean off Alonissos longer. Didn't make the snorkel trip. Didn't hit other beaches I've yet to see.

Instead to be quiet where I am.

Making quiet choices to sit or float in moments—lingering longer and longer—letting go of more and knowing enough.

Why? I don't contemplate as I slide into now. Living in my moments. Not needing or truly wanting more. Filling myself with now's. Todays. Enough. Shhh, don't ask me why. It's something we figure out for ourselves.