The Chemist by Stephenie Myer reminded me that I once wrote a book about an assassin. I enjoy action adventure reads when I get to know the character and there's more to the story than chasing and shooting. I enjoy a deep plot. Those kinds of stories can be hard to find.

When someone offered to loan me this hardcover book for a read, I quickly took them up on it. Many of the books I read come about in that way, serendipitous. Strangely I've never belonged to a book club but as long as I can remember I've been part of informal circles of readers who exchange books or sometimes buy each other books to send. For me that means they come vetted and recommended. Later we'll sometimes discuss them, but not always.

The Chemist didn't really come vetted. The giver said she hadn't been able to "get into it" and gave up on reading it. I had no problem, this book had me at the synopsis. In fact I read it in a day, walking around with it, staying up late and waking up early to continue.

Now Stephenie Myer gets a bad rap for Twilight in our criticizing everyone culture, but if her name hadn't been on this cover I'd not have recognized the writing.  This is next level writing and story. 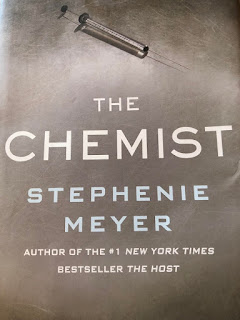 It's about a woman who worked for a type of black ops program for the U.S. Government. She's running from them now and spends her nights sleeping in bathtubs wearing a gas mask, always prepared for an attack. Attacks come too, but she's thought through her defenses and escapes again and again.

She's tired of running and about out of money when she gets an online message from her old boss with an offer she can't refuse. Taking a chance that could lead to her being forgiven, and getting the target off her back, she winds up in an even bigger mess. I don't want to give any spoilers, but it's a good read and hard to put down.

Check it out. I'd love to know what you think about it.