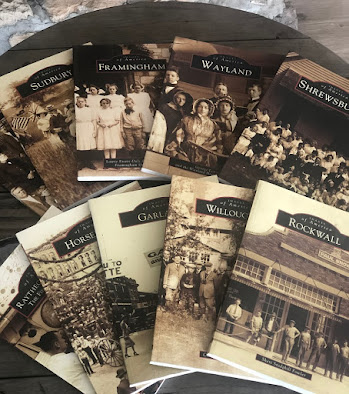 My BFF gives the best gifts. Over the years she often includes something from my hometown. I moved away long ago and the memories are priceless. When the kids were little they knew that the Willoughby throw my BFF gave me was off-limits. No wrapping the dog in it, no wrapping a kid in it and eating chocolate ice-cream. It was special to me. It was woven with pictures of the local library, schools, and remembered 19th Century homes. I didn't think anything could top that gift until this year when my bestie sent me a little book about my hometown.

It's full of pictures from the founding of the town and through the decades. It even includes old stories and legends I remember obsessing over as a child growing up there. There's a picture of my elementary school that was torn down. I loved seeing the old trolleys I'd never known once existed, and all my favorite rivers, parks, bridges, and haunts.

It's been ages since I lived in Willoughby, and I've lived in many towns since then. It surprised me to find most of them represented with their very own books in Images of America available through Arcadia Publishing and Barnes and Noble. There's nothing better to splurge on than books in my opinion, and I bought one from almost every town I've lived in. Some are more in-depth and interesting than others. All of them are worth the approximate twenty dollar cost.

Likely I'll never stop missing Texas. Reading through this book I once more got caught up in the great mystery about the Lone Star State's smallest county. There are portions of a prehistoric rock wall that is a matter of much debate—was it man made or is it a natural geological formation? There's good authority for both arguments and when I lived near that part of the wall I might have joined in the digging but for the formidable legion of fire ants guarding it. That's the only thing I don't miss about Texas, fire ants.

Shrewsbury is a picturesque New England town, closer to Worcester than Boston. I used it in my book Bitch Witch. That entire story landed in my brain during a late night run to Target under a blue moon. The house I used to live in was a perfect setting for the formidable Archer women. That story wrote itself and I have Shrewsbury to thank for it. Though I didn't live there as long as other places in Massachusetts, it stayed with me. I got the Images of America books for most of my Massachusetts towns, including one for where I used to work. Surprisingly some companies are included in this series.

To date I've collected ten of the Images of America books, not including the ones I've gifted. One thing I've learned from my bestie is to share good ideas. Browsing the Arcadia publishing website I realize that even some mountains have their own books. It makes sense, everyplace has a story. I've just added a couple more books to my wish list.

If you want to know more about your favorite American towns and places, check them out. Let me know what you think.