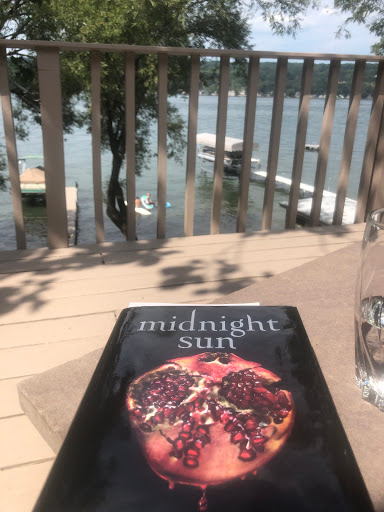 On Goodreads Midnight Sun by Stephenie Meyer has approaching 30K reviews with an average rating of nearly four stars. That's not so shabby. Do you remember that Meyer began writing this book back when Twilight was popular and the partial draft got stolen and posted online? She stopped writing it and said she wouldn't pick it up again until someday when we'd all forgotten about it. Despite having read the online excerpt, and enjoying it, that was so long ago I'd definitely forgotten about it.
In fact I had no idea this book was out. Once I did, I tried to get a copy but there were none to be had. (I wanted a hard copy.) A kind reader mailed me one. I took it to a local lake house for my one and only vacation this year, and read it sitting by the lake. It took me all week to finish the whopping 658 pages.
It wasn't just the size that slowed me down. It's that throughout the entire book I kept drifting into the realization that I'd read this book before. It's the entire first Twilight book from Edward's perspective and I mean it's that entire book scene by scene. Sometimes I'd stop reading to hunt down a young adult and quiz them about the Twilight world. I couldn't figure out why I knew so much about the vampire's perspective in Midnight Sun as I read it. Why were the rare bits of new information that weren't in the original Twilight books still so familiar to me?
The young adults told me because it's the same book, with the haughty disdain of people who don't want to admit to their teenage obsession. A couple of them told me that the Twilight books are popular with women "my age" and not theirs. Years ago I wrote a review for Twilight, admitting I liked the books. I don't entirely believe that millennials don't plan to read the latest book. Thirty thousand women "my age" didn't leave all those reviews on Goodreads. I know this because many of them don't even know how to leave a review on Goodreads.
One of the reasons I've defended Twilight to my serious reader/writer friends is simple. If a book sells millions of copies and spawns fan clubs and movies, it has succeeded in taking readers into another world and is an undeniable success. Picking on the writing or characters feels like sour grapes to me. If you want a higher brow book, read one or better yet, write one. I read a bit of everything—fiction to non-fiction, literary to Twilight. Sometimes I want to be educated and sometimes I want to escape.
All that said, I wasn't crazy about this book. I plodded through the last couple hundred pages, muttering to myself. I had a copy of Glennon Doyle's book with me too, Untamed.  I didn't want to finish it on vacation though because it makes me yell at my husband. I thought there would be more new information in Midnight Sun, but the greater bulk of the book is Edward's feelings and they're not all that different from Bella's. There was also what seemed like some justification of Edward's actions—you know his stalker behavior. Not to mention some justifying Bella's wimpier moments. I didn't care, but sometimes it made me chuckle because he did stalk her (and I'd bet most stalkers feel their actions are justified), and sometimes we're all wimps and we justify those times to ourselves too.
It didn't matter to me. Though there were also times I enjoyed the mental gymnastics of all the justifying. I write and it's great insight to really dig into your characters. But it didn't forward the story for me. It didn't matter. Sure, I could have stopped reading it, but what if I missed something interesting?
The beginning is fun, though I couldn't tell where the stolen online excerpt info ended and the new book began. It seemed like halfway in. The pace is slow. There is some new information, but it felt like panning for gemstones in all Edward's feelings and they can be a bloody mess. The ending gave the greatest amount of new information, yet even the part where the Cullen's are tracking down James the tracker didn't really tell much that was new. I did enjoy the details of the car race through Phoenix to the ballet studio. I enjoyed how Alice's vision works. I would have liked to know more about Jasper's brilliance. Emmett is a great side character, and Rosalie's cussing out Edward at the top of her mental lungs was probably my favorite detail. 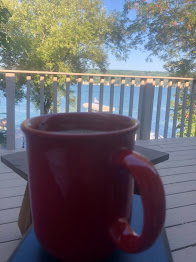 Despite my criticisms, if Stephenie Myer's writes all the books from Edward's perspective, I'd probably read them. It's fun. You can only put so much detail into a book without slowing it down and boring your readers, but doing it like this does enrich a story with it's depth. Yes, I said Twilight and depth in the same sentence. Midnight Sun is a nice enough summer read and I enjoyed some COVID escapism. Kudos to the author on that accomplishment alone. We all need to go somewhere these days. If it's a familiar neighborhood we all used to like, what more could you want? Hopefully you'll read it too and come argue your perspective with me. Especially you millennials. Read what you like, and like what you like, no apologies. That's advice from a woman "my age".