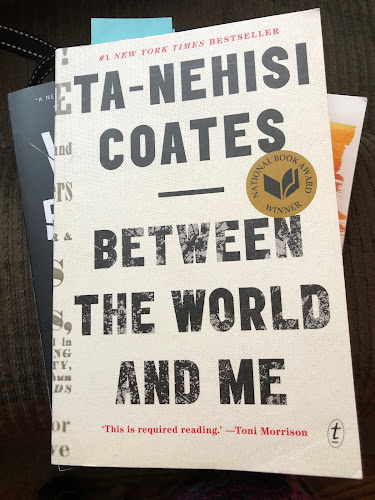 Between the World and Me is written by a black man, Ta-Nehisi Coates, for his adolescent son. It's a National Book Award Winner and a #1 New York Times Bestseller. The book is Coates' experience and advice to his adolescent son on what it's like to inhabit a black body and find a way to live with it. This book is visceral and deep, painfully beautiful, and will climb inside you.
To say it's five stars doesn't go far enough. It's brilliant. It's a short book of a mere 152 pages yet you need to pause and catch your breath throughout it. There are no chapters. It begins with:
Son,
From there the pages are blocks of words with few paragraphs and no white space. White space is a writer term for what's considered "breathing space" within a book. This book is only broken up by a rare photograph or a quote. It struck me as I dove into Between the World and Me that there was no escape from Coates' words. There was no space to rest and no room to breathe. The entire time I read, George Floyd and "I can't breathe" weighed on my soul.
Coates is a brilliant writer and there are quotes that I found particularly profound, painful, and perfect. In discussing his friend, Prince Jones, who was killed by police, this has been burned into me:

"Prince Jones was the superlative of all my fears. And if he, good Christian, scion of the striving class, patron saint of the twice as good, could be forever bound, who then could not? And the plunder was not just of Prince alone. Think of all the love poured into him. Think of the tuitions for Montessori and music lessons. Think of the gasoline expended, the treads worn carting him to football games, basketball tournaments, and Little League. Think of the time spent regulating sleepovers. Think of the surprise birthday parties, the daycare, and the reference checks on babysitters...Think of checks written for family photos. Think of credit cards charged for vacations. Think of soccer balls, science kits, chemistry sets, racetracks, and model trains. Think of all the embraces, all the private jokes, customs, greetings, names, dreams, all the shared knowledge and capacity of a black family injected into that vessel of flesh and bone..."

It's the first thing I've ever read that seemed to come close to what I think of as the fathomless loss of losing a child.
Another story that struck me with particular severity was this one:

"One afternoon your mother and I took you to visit a preschool. Our host took us down to a large gym filled with a bubbling ethnic stew of New York children. The children were running, jumping, and tumbling. You took one look at them, tore away from us, and ran right into the scrum. You have never been afraid of people, of rejection, and I have always admired you for this and always been afraid for you because of this. I watched you leap and laugh with these children you barely knew, and the wall rose in me and I felt I should grab you by the arm, pull you back and say, "We don't know these folks! Be cool!" I did not do this. I was growing, and if I could not name my anguish precisely I still knew that there was nothing noble in it, that a four-year-old child be watchful, prudent, and shrewd, that I curtail your happiness, that you submit to a loss of time. And now when I measure this fear against the boldness that the masters of the galaxy imparted to their own children, I am ashamed."