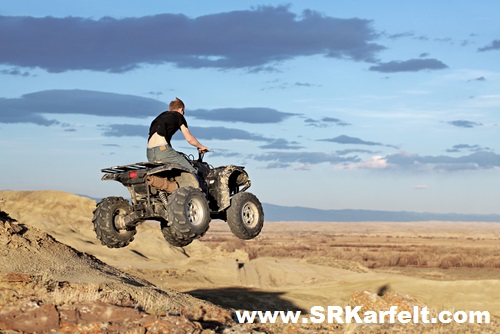 "The doctor said I was lucky I survived," my husband said, looking guilty.

"Did you tell him?" I asked. "Did you tell him that after you rolled the four-wheeler on yourself and winched it to a tree to upright it, that you then rode it for another two hours?"

"If you're lucky, I won't mention the part where right after your rollover, you wanted to have sex."

Obviously he's not lucky, because I'm telling. And no, he didn't get lucky. Well, yes, he got very lucky because even though he broke ribs one and two (which are right over the vascular system and apparently could have killed him), and broke his sternum, and bruised up a lung, he basically walked away. But he didn't get lucky-lucky, which is again lucky, because getting frisky might have killed him.

Then I'd have had to live with that, although it probably would have made me super-popular among the cruise-ship and widower crowd. People would say, that chick sexed her husband to death, but I want no part of that. I kind of want to keep him and if I'm going to get a badass reputation, it's going to be on my terms.

Watch out. That chick writes what she wants.

Sorry, not sorry, hubby. Maybe fear of public ridicule will work because my warnings for the past thirty-five years haven't done a darn thing. We have this on-going argument where he tells me that it is normal to break bones now and then (without any underlying condition) and I tell him he knows nothing about normal. Not that I do, but I read a lot.

I love my husband, even though he makes me nuts.

The pain hit him eventually. For a good while he could hardly move. I have to assume that right after the accident he was rolling on some sort of adrenaline rush. But when I mentioned cancelling his upcoming wilderness vacation, he insisted he could do it.

"I've got a couple weeks to heal."

One thing you learn from being married forever is that all arguments are old arguments. You know exactly what you'll say, and exactly what your spouse will say, ad infinitum because you've had these same arguments so many times they're like ear-worm songs. It's exhausting, not to mention annoying, to argue in rounds for decades.

So I knew he'd get himself to Nowhere, Canada for his wilderness adventure. I went all Florence Nightingale and went too and helped. Some. Okay, a little. To be fair my husband doesn't just balls out go wild and crazy about everything—he's usually smart about it. He put his boat on a remote control so he could put it in the water and it'd drive itself to the dock and wait for him to park the trailer.


That's because of the nerdy part of the badass husband. 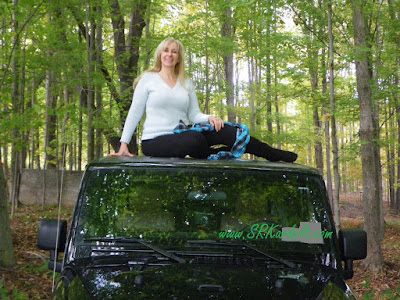 badassery. It's far less scary. It's taken me months to write this story. I wanted to make sure he didn't sneeze and die or something. Because then it wouldn't be funny in the least, even though then I could say I TOLD YOU SO. Which I would say, and I am saying, and also, I hate ATV's. Jeeps are better, so long as you keep them upright.