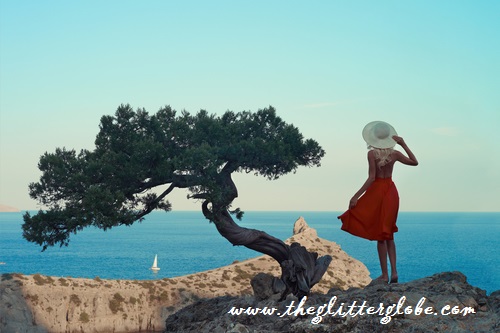 Social Media seems full of pumpkin spice lattes and laments for summer to end. Has everyone lost their minds? This summer has had its share of fire and floods, but on the other side of October lies blizzards and cold.

While I stood in line purchasing a couple last minute items for my workshop in Greece, everyone else was making back-to-school purchases. I didn't make eye contact and kept my big mouth shut because Nobody Wants to Hear About My Upcoming Trip to Greece!

How do regular mortals pack without needing eight hours and weeks of preparation? Since I'll have to haul my own bags on and off flights out on the blistering hot tarmac, up and down crowded ferry steps, and up flight after flight of wide steps in ancient hillsides, I have plenty of inspiration to pack light. Its the implementation that's the trouble.

A Mental Floss blog had the best tip I've read in a long time. It said that we pack our fears. What if I need this? What if it gets cold? Who doesn't do that? I take a small suitcase and a carry-on stuffed with the things I absolutely have to have when (if) the airline loses my luggage. That fear cautions me as I pack. Carry on those adapters! Carry on your glasses! Carry on that bottle of Prelief!

Even though I'll be gone for a month, I'm taking only four lightweight dresses and three other outfits. That's it. Everything is versatile and can be changed up. I feel like I've earned a Girl Scout badge for it.

PERSUASION by Jane Austen. Somehow I never read this before. Austen books are thinking books, but in a fun and entertaining way. They're fluff on the outside. This one is an old maid (27) dealing with the man she wanted to marry in her youth (21) coming back into her life. It's not written like books are now—like a movie—it's written in what's commonly referred to as "telling", but it allows the writer to put real depth and commentary into the story. It was good, if you like deep stories.

GHOSTED by Rosie Walsh. California girl Sarah meets Eddie while visiting her parents in England. They have seven days together and learn more about each other than people with seven years. Eddie disappears. As Sarah tries to find him she realizes she doesn't know as much as she thought. This book surprised me, and as a writer myself I have to say not many books surprise me. Nice summer read.

ALL THE LIGHT WE CANNOT SEE by Anthony Doerr. This is possibly the best book I've ever read. I listened to it on Audiobook and went right out and bought a hardcover copy. I can tell you it's about a little blind girl in France during WWII. I can tell you it's about a German orphan boy who becomes a Nazi soldier. That doesn't go far enough. This book shows you how small people matter, and how good people can do unspeakable things. It is brilliant. It won a well-deserved Pulitzer. Boerr is a brilliant writer and a lot of work went into this novel. Read it. It's going to be a movie, but that will be akin to someone telling you what Van Gogh's Starry Night looks like. Some things you have to put your eyes on yourself.

Today I put The Alice Network by Kate Quinn and Before We Were Yours by Lisa Wingate on my Kindle for my trip. I'm still debating what paperback to take, but I'm leaning toward The Book of Joy by Dalai Lama and Desmond Tutu.

The truth is I thought GF was a fad. Despite having had an autoimmune disease for over a decade now, I didn't pay attention to gluten free until my symptoms became downright miserable. This has been a game changer for me. I cannot believe the difference. All symptoms have lessened by about half.

It's more than not eating bread. Gluten is in everything. It's in salad dressing. It's in your hibachi dinner. It's in miso and soy sauce. Cutting it out takes effort. It's worth it if you have a problem.

As far as sugar-free, I'm working on it I swear.

If you're on a flight that has meal service, you can request a gluten-free meal (or another special meal). Order it ahead of time on the website (at least 24 hours ahead). It's usually under Special Service Requests. According to the Delta website (which I'm flying this trip), you're to mention it to the gate agent and again to a flight attendant when you board. I think they'll all be annoyed if you do. I'll just take a banana and apple in case it gets messed up.

Since I'm flying out of a small airport in New York State I have several connections. I leave New York for Greece early in the morning. First I fly to Detroit. Yes. That's the wrong direction, but I don't make the flights. Then I fly BACK TO NEW YORK. HAHAHAHAHA. It's a different airport though. After that I fly to Athens, Greece.

Once in Athens I'll stay a couple of days. I'm debating if I can walk up to the Acropolis in full-on ninety plus degree weather to visit the Caryatids again. I love those ladies.

Next stop after Athens is a flight to Skiathos. If you watch this video of tourists standing beneath landing/taking-off airplanes in Skiathos, well, you'll get a real taste of Greece tourism.

Skiathos is a touristy island. It has great beaches and a lot to do. Normally I get out of there fast. This year I'm hanging around a bit to do some writerly things. I'm a really bad liar because I can't even think of a single example. Fine. I'm meeting a couple friends and we're going to eat olives and talk books 24/7. When I leave Skiathos it will be by ferry.

My destination is Alonissos and my writing workshop there. It's quieter and I mean it as a compliment if I call it old-fashioned. It's my blue heaven after all.

For the next month I won't be on social media other than to post photos to Instagram and, if I can get blogger to trust me from Greece (and not to go into Greek which I cannot read), I'll post some blogs.

If you're going back to school while I'm there, or if your kids are, I want you to know that eventually you'll get out of school (and so will your kids) and Greece will be right there waiting for you too, like it did for me. Enjoy summer while you can. It's so very fleeting.

So it's okay if you stop with the pumpkin spice crap already, okay?