Giraffes, Free-Range Children, and I Think I Saw Jane Goodall 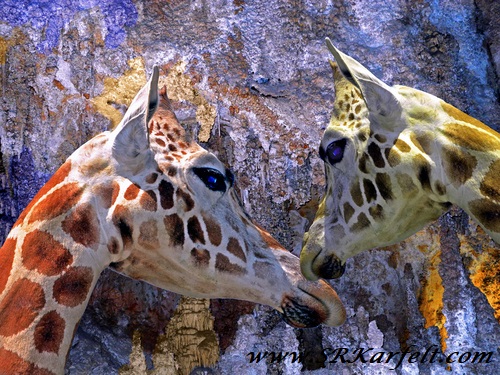 Giraffe's have long black tongues they wrap around leafy branches to tug food into their mouths. At least these Spanish giraffes did. Little kids tore bits of greenery from nearby trees and offered them in hopes of coaxing the animals closer.

We stood on a wooden bridge over the giraffe's habitat and I waited my turn. Feeding the animals isn't just for kids. They shoved and jostled each other, but I waited. Patience is my superpower. Sooner or later the elephants up ahead will catch someone's attention and they'll hurry off.

It took me most of the morning to walk to the Bio-Park from my hotel. I got lost several times. Since I know no Spanish to ask for directions, I just kept walking. Valencia boasts futuristic bridges and buildings. They're sometimes featured in movies set in the future. But most of the town looks like anywhere USA to my eyes.

The animals at the Bio-Park aren't in cages. They're free-ranging mostly, like the children who are now attempting to entice the giraffes into eating clumps of dirt or the littlest one's hair bows. The giraffes aren't falling for it, so the kids head for the elephants.


Patience is an epic superpower.

Circuses and zoos stress me out. I worry about the animals even while admiring them. Here I worried about myself at first. Something brushed the top of my head as I stood by a tree looking at a map of the Bio-Park. Only then did I notice lemurs moving through the trees above me.

I loved being so close to the animals, but I've lived on the outskirts of where the deer and the antelope play. I have a healthy respect for animal-human boundaries. As humans we sometimes have differing agendas. When I'm hiking and happen across a mama bear and her cubs, or when I'm pushing a stroller and see a bobcat slinking in the yard next to me—I get nervous.

Once I took my kids to one of those drive-thru zoos in Texas. We rolled down the windows because they provided a bucket of food for the animals. They knew the drill and hurried to the car. The giraffes were polite about it. They scoot lower and both nose and tongue are suddenly through the car window. The ostriches weren't polite. I don't think they know how to share. I loved them both, it's incredible to get so close to them, but I also love my kids and quickly surrendered the entire bucket to the most insistent bird.

Sometimes it's better for everyone just to look and move on.


There was no bucket of food to entice the Valencia giraffes, but my persistence paid off and I patted a nose or two.

The BioParc gorilla habitat is spectacular. It's wide open spaces and a waterfall. The people path goes through a cave-like area. Heavy glass is the only thing separating us from the gorillas here. Several young men stood on my side making gestures at a large male. Sitting stoically he endured for a time, then suddenly raced after smaller gorillas in the habitat and hit them.

Just like people, apparently gorillas take out their frustration on others sometimes.


I wished there were rules posted about not teasing the animals. As I continued through the cave-like area I came upon another window. A huge gorilla lay sprawled on his side alternately placing a foot or hand against the glass. A woman sat on the other side pressing her hand on it against his.

For a moment I watched, transfixed. I thought, she looks like Jane Goodall. After a moment I snapped a quick photo and went on my way. Cue me a couple years later now, finally going through thirty thousand photos or so of my travels. As I put together a video to share, I saw that gorilla and woman again. Once more I thought, that really does look like Jane Goodall.

This time I got on google to see what the odds were. To my surprise she's been at the Bio Park in Valencia. So maybe. Here's the video. My Maybe-Jane is at the 1:45 mark. Let me know what you think in the comments below. Either way it was a serendipitous moment for me. For that gorilla too, I think.