The Valley of the Kings and Tut's Curse

You do realize that every single person entering this tomb is going to die, don't you?

After weeks in Egypt most of the study group was coughing, not entirely from mummy dust. Probably not from ancient curses. Egypt is dusty. Deserts are dusty. Have I mentioned the dust?

There's an old-fashioned tram you take to reach the tombs in The Valley of the Kings. It reminds me of Disneyland. But no amount of artifice could duplicate this place. High cliffs surround the valley. Boulders worthy of Indiana Jones perch at dangerous-looking angles as you pass beneath.

Precarious boulder placement always reminds me of my husband. Once we were driving a rental car with questionable brakes along a narrow road beneath dodgy-looking overhanging rocks in the Sierra Nevadas. Below us cliffs dropped to raging rivers and certain death with no guardrail.

"I have to close my eyes," I said.
"Why?" asked hubby. "Do you think this mountain has been waiting millions of years for you to drive by?"
"Yes," I said. "Yes, I do."
"That's pretty conceited."


Only an engineer can make you feel vain about expecting death.

The biggest dangers in The Valley of the Kings appears to be sun-related (heatstroke, sunstroke, not packing enough water). I appreciated those precarious boulders just the same. Vendors selling postcards waited as we disembarked. I bought two large piles of them for $1 each. To date I've taken approximately thirty-five thousand photos on my phone and I doubt one of them is as nice as a postcard.

Photographs aren't allowed at all in what I consider the best tomb. Seti I is stunning. I recommend going there first thing. Most of the tombs are enormous. The hieroglyphs, paintings, reliefs, and few remaining artifacts are so beautiful and intriguing it's easy to spend an hour or more in each tomb and run out of time. Seti I and Ramses VI were my favorites, but they're all stunning.


This Pharoah's unabbreviated name is Tutankhamun. His tomb is recognizable and notable because it was discovered intact—which is unusual. The other tombs had been ransacked over the centuries.


Archaeologist, Howard Carter discovered Tut's tomb in 1922. There are old black and white photographs outside the tomb.

Some of my study group have been returning to Egypt and the Valley of the Kings for so long that they reminisced about a time when you could slide down into the empty treasure room on a ramp.

Now that treasure room is covered up and beneath your feet as you stand outside the tomb entrance examining photographs.


Tutankhamun's treasure can be see at Cario's Egyptian Museum. Here are a few of my favorite pieces. 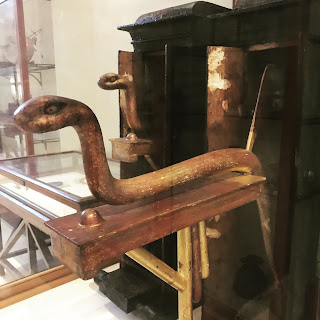 This snake is designed to surprise and slide quickly out of his hiding place.
It still looks like it's moving! 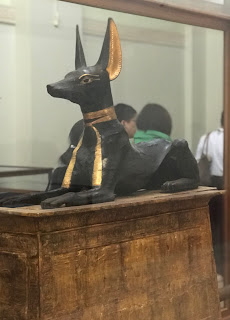 Anubis is my personal favorite.
He's the god of the afterlife and not a dog as I like to pretend.
Who doesn't want to be greeted by a dog in the end? So please
leave my illusions alone. 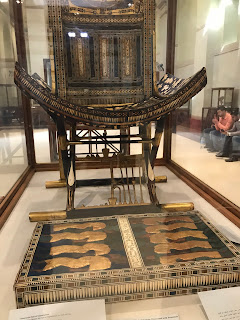 There are several thrones. What delighted me
was the footstools decorated with the kings enemies
so he could rest his feet on them. Why did that go out of style?

Lord Carnarvon died six weeks after helping Carter uncover Tutankhamun's tomb. Something happened with a canary. Cobra symbolism became involved. There were rumors. It was said. Whatever, whatever.

In the end every single person who uncovered Tut's tomb died! Don't allow the near one-hundred years that have passed make you logical. There was dust! Probably coughing.

Please excuse my curse irreverence. I reserve my worrying for important things like precarious boulders. Come on, which do you think is more likely?