The moon is dark and I’m awake. Dorcas is too. That’s why I’m pretending I’m not. Her sarcophagus is on the far side of the cemetery, but I hear the metallic creak as it slides open.

She’ll want sex. Not a bath, or to clean her teeth, or even to change out of the raggedy gown she’s been wearing since we moved to this village during the time of Cromwell.

Sex with her wasn’t something I enjoyed even when we were alive. “Drake,” she says already at my grave, kicking the iron of my bale-tomb cover. I open my eyes to protest as rust drops into eyeballs.

Banging the cover of my grave open I hop out, trying to work the rust out of my eyes without damaging them. Being dead doesn’t save me from injury. I even heal. Eventually.

“Come on!” Dorcas hitches her raggedy gown up, exposing legs as hairy as a mongoose.
“I need to eat first.”
She growls, but runs off. I should cut the Almersham lads a break and take one for the team. I’m the husband willing or no. The difference is they won’t remember.
Ravenous, I hurry to the church. Someone always works nights. I arranged it long ago.

It takes less than a minute to find no one in the church. There’s half a sandwich and a plate of Christmas cookies in the basement. I eat it with half a jug of vinegary communion wine before stomping up the stairs. My church is unguarded and worse—Dorcas and I were too.


I’ll have to go into the village. We’ve been asleep since the summer solstice and I’m too hungry to think straight and as likely as Dorcas to make poor choices now. Maybe I’ll visit the barrister first and suck a year or two out of him.

A voice catches my attention. Only I have a key, but the door to my private quarters is cracked open. Inside my missing security guard is feeling up a fleshy female who only has eyes for the altar from my tomb.
“Take your hand off my backside, Jack,” she says, bent over and peering up under it. I see his temptation. He doesn’t listen. That and the trespass are unforgivable. From across the room I suck a year off his life, maybe more before I can stop. The woman, now crawling beneath the table doesn’t even look up when he falls.

“Get up! I appreciate you showing me this, but I’m not doing you on the floor,” The woman sits back on her heels, “Or anywhere for that matter.”
Jack remains unconscious.
“This altar is Egyptian, but I swear it’s not a thousand years old.” She’s engrossed with it.
“Twelve hundred,” I say, locking the door.
“I don’t think so. The hieroglyphs are—”
“It’s my table. I know how old it is.”
Finally realizing it’s not Jack talking, she tries to stand and knocks her head so hard under the table, she winds up on the floor too...to be continued next Wednesday.

A Vampire's Tale of Woe came to me a couple months ago as I was traveling around England. It was all those churchyards and ancient churches with graves not only outside, but under the floors and in 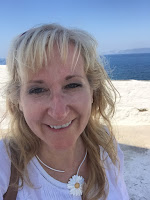 Sometimes stories will appear with fully formed characters and I can barely wait to start writing them.

Yes, I'm Drake Ahmemphis, Saffi, and Bitch Witch too. At least these characters and stories are some of the ones in my head clamoring to be written.

At the moment I'm in Egypt doing research for this story and another. Let me know if you think the world really needs another vampire tale, because I might just need to write one.