If I were to boil down my long marriage in search of the glue that keeps it together, I think in the bottom of the pot I’d find some remnants of a one man show called Defending the Caveman. The first time Dear Hubby and I saw the show was in the first decade of marriage. We’ve seen it countless times at this point. It traveled the country, and right now it’s in Vegas on a regular basis. We took a grown daughter to see it recently. She loved it.

Back when I spotted an advertisement for it in The Dallas Morning News. It caught my eye because it was touted as the equivalent to years of marriage counseling. Why is it that women are so often interested in going to marriage counseling but men back off with that Don’t Stir the Pot look of terror in their eyes? Dear Hubby only agreed to see the show because it was at a Comedy Club. I was jazzed because I knew it would be the closest I’d get to counseling and I was enthusiastic, hoping that he’d realize what a savage he was and stop it.

The show started out with a short video showing a married couple in the throes of the usual situations—namely messy barbarian versus civilized female. You know the drill. One scene that particularly stuck in my head involved a woman trying on outfit after outfit to go out, and the guy digging through the hamper and sniffing his shirts. The women in the audience were in hysterics. Most of the men were nodding somewhat abashed. Of course mine whispered, “Oh come on! You never do that?” No, hon, never. The video culminated with woman after woman espousing for the camera, “He’s such an asshole!” And the screen showed shots of plenty of back-up evidence to the statement. It brought the house down to thunderous applause—all the women were now on board.

At that point Rob Becker, the creator of the show would come out and talk. The first thing I remember him saying—after he could speak over the cheering and laughter—was, “If that had said all women are bitches, this place would be on fire right now.” Um, how true is that? The gist of the show is simple. In the beginning men were cavemen, hunters of the tribe. The women were cavewomen, the gatherers of the tribe. We’re still hardwired for these tasks, and as Rob Becker presented his evidence for the case it rang true. 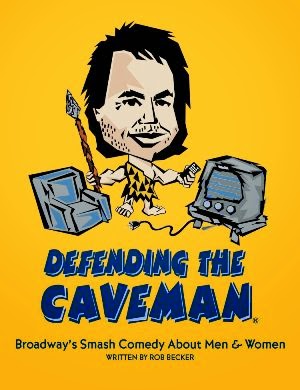 One example was shopping, and I’ll paraphrase and add some glitter here. You might have a situation where a man goes to the grocery store for bread. An hour later he returns with bread, possibly frustrated and disappointed to discover there is nothing to put on it at home. “But you were at the grocery store,” you say. “But you told me to get bread,” he says.


You didn’t tell him to bring meat. Grunt. Now the woman goes to the grocery store for bread. An hour and $200 later she returns home. She needs help unloading the haul. “Why did you buy Easter candy? It's July,” Husband says. She responds, “I got that entire bag for $4. I’ll freeze it. Easter will come again, someday.” Husband grunts, and carries in the bags of groceries, Easter candy, and one bag full of knitted wool hats. He didn’t even know they sold wool hats at the grocery store. Especially in July!

Another huge difference between the Hunter and Gatherer is communication. The hunters negotiate. Who will chase the mammoth? Who will spear the mammoth? You can’t all spear it, and if you got to do it last time, forget it. There is arguing. Someone wins, someone loses. It’s different with the gatherers. They cooperate. Who feels like going into the swamps to gather herbs? It will be wet, cold, and miserable. Perhaps they should all go together and share the burden. It would be fair, and faster. This worked for the entire clan. But over time the hunters and gatherers began to work together. This is when problems came in.

My favorite example directly from the show happens at a party. It’s crowded and busy and took a lot of effort to prepare for, but everyone is having fun. The chip bowl is empty. The husband is heading for the kitchen to get something. The wife whispers, “The chip bowl is empty.” The husband glances at it and responds, “I filled it last time.” I think we can guess what seven letter name the wife is thinking about calling him then.

The thing is if it were all guys the situation is likely to go as follows. The chip bowl is empty. Everyone waits for someone else to fill it. Finally the dip is turning. Al says to Bob, “Go get more chips.” Bob says, “I got the beer.” Carl chimes in, “I bought the beer.” Dave says, “I bought the chips.” Eric says, “I pay the cable bill, and this is my house you’re trashing.” Everyone looks at Frank, who’s got nothing, and stands up to go get the chips.


Life is good. Negotiation complete. All is fair.

Now let’s say it’s a party of all women. The chip bowl is almost empty. Alice says, “We need more chips!” and rises. Betty says, “No, I’ll get them!” Cindy hops up, “Let me!” Dina grabs the bowl. Emily wipes chip crumbs off the table into her hand. Francesca leads the way, and they all go into the kitchen together.


Life is good. Cooperation accomplished. All is fair.

After Dear Hubby and I saw Defending the Caveman the first time I remember my face hurt from smiling and laughing so much. Over the years and now decades we’ve seen ourselves and each other in the hunter-gatherer and negotiator-cooperator roles quite often. We’ve seen the show many times with friends and family. There was a rumor that Rob Becker had offers to sell the show to HBO or a movie or something. The rumor went that he never did because everyone wanted to take out or change the ending, which is serious. It’s a charge to respect the differences in your mate, and basically to be mindful of their ways when you’re negotiating the world together.

It’s a proclamation that men are not assholes. After many years with mine, I concur. They are not. They’re some kind of wonderful.

If you ever have the opportunity, I can’t recommend seeing this show enough. I wanted my husband to realize he’s a savage and stop it and left Defending the Caveman realizing we’re both savages in our own ways. It’s like getting a user manual for the opposite sex. Interested?