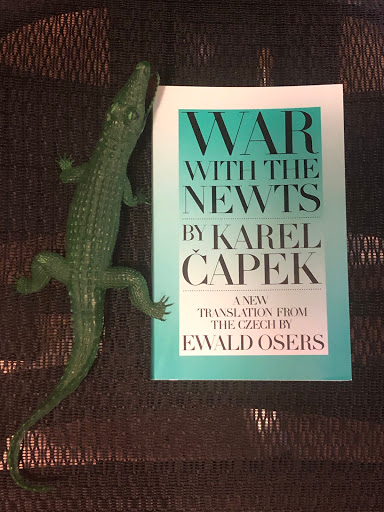 This book by Karel  Čapek (pronounced Chap-ick) came highly recommended by a Czech friend. In fact she sent me a copy with the best English translation she could find. Imagine my surprise to see a blurb on the back cover from none other than Kurt Vonnegut.

"God bless Catbird Press for calling the attention of Americans to a great writer of the past who speaks to the present in a voice brilliant, clear, honorable, blackly funny, and prophetic." ~ Kurt Vonnegut

War with the Newts is about a Sea Captain who finds salamander-like beings who help him harvest pearls. I love the way it's written. It's fast-paced with the help of newspaper clippings that one of the characters collects about the newts.
It stunned me to realize how absolutely relevant this book is in today's world. I didn't get very far in before the Sea Captain was deep into racial slurs for pretty much the entire planet. He hits up a lawyer he remembers from the old neighborhood as a "pimply Jewish kid". Captain J. Van Toch had bullied Bondy in school and now he asks for his help with his newt enterprise. They're old men at this point and both remember the old days fondly, which both made me roll my eyes and chuckle a little.
Blacky funny it is, but also horribly prophetic in turn. Mankind enslaves the newts. They're used in medical experiments, treated with no regard other than economic needs and help in underwater engineering endeavors (something they're profoundly brilliant at). This book made me see on yet another level how absolutely inhumane and disgusting slavery was.
My first impression of the book was knee-jerk judgement for the racist language and the stereotyping comments about Czechs, English, Americans, and pretty much every nationality. That quickly gave way to the realization that this author knew exactly how to get his point across. What blew my mind was that this book was published in 1936, after World War I, but before World War II, yet it foreshadowed the Second World War at every turn. Another thing that shocked me was that the stereotyping in this book is precisely the same kind still espoused about countries and peoples now.
It even had people in the southern half of the United States trying to give the newts religion and occasionally lynching them. What I think you get from this book is how little the world has changed in nearly a hundred years, how selfishly cruel humanity can be, and how exceedingly short-sighted and stupid we can be when we look at everything first from an economic standpoint.
If I could have one wish after reading this, it would be that everyone in the country would read this book. Karel  Čapek was nominated for the Nobel Prize in Literature seven times. He introduced the word Robot into our language. He and his brother, Josef, were famous for their work. When the Nazis invaded Czechoslovakia (now the Czech Republic) Karel was considered Public Enemy Number Two. They weren't aware he'd already died of pneumonia, but his brother, Josef, died in a concentration camp. They weren't Jewish, but were well-known to be anti-fascist.
War of the Newts is a short book and a brilliant read. I'm already hunting up more of his work. It's absolutely that good. I cannot possibly recommend a book more. No amount of stars can do it justice. Read it. You will be blown away.
at August 03, 2020