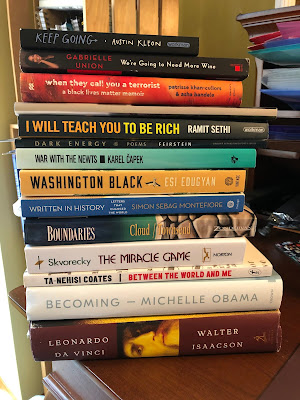 Keep Going by Austin Kleon: I've read this several times and now keep it on my read pile.

We're Going to Need More Wine by Gabrielle Union: Because it caught my eye in a bookstore months ago.

when they call you a terrorist a black lives matter memoir by Patrisse Khan-Cullors and Asha Bandele: This too caught my eye in a bookstore a few months ago. Also, diversity in reading helps make sense of the world.

A Journal of the Welsh Experience by Bailey Karfelt: This is a privately published little gem and not available for purchase. It's about wild outdoor adventures during a study abroad in Wales.

I Will Teach You to be Rich by Ramit Sethi: This year I promised myself I'd read books on finances and economics. I don't want to be rich, just not financially stupid.

Dark Energy Poems by Feirstein: A few months ago I went to a bookstore in Cambridge, MA and this little gem insisted on going home with me.

War with the Newts by Karel Capek: Twice now I've read this book halfway through. It was given to me by a Czech friend (she said it's a good translation). Karel Capek is the writer who coined the word robot. It's absolutely my thing which is why I have to start over every time I put it down and don't pick it up again. A sea captain finds a group of underwater humanoid creatures to help him in an economic endeavor. Circa 1936.

Washington Black by Esi Edugyan: A fictional story about an eleven-year-old field slave on a Barbados sugar plantation. He's given to his master's brother who is a naturalist and abolitionist.

Written in History letters that changed the world by Simon Sebag Montefiore: This book though! I picked it up at the Harvard bookstore in Cambridge, MA. It contains letters of people throughout history. Alexander Hamilton to Augustus. Henry VIII to Anne Boleyn. Frida Kahlo to Diego Rivera. Hitler to Mussolini. Roosevelt to Churchhill. GANDHI to HITLER. And on and on. It is brilliant. I read it a couple letters at a time.

Boundaries by Cloud/Townsend: I've reread this book at least twenty times. It's time for another go. It's all marked up and full of bookmarks. Highly recommend.

The Miracle Game by Josef Skvorecky: It's heralded as an energetic and hilarious novel made more important by the final thawing of the long Communist winter in the country once known as Czechoslovakia (Czech Republic). It came highly recommended, a gift from a friend.

Between the World and Me by Ta-Nehisi Coates: Let's use Toni Morrison's description, "The language of BETWEEN THE WORLD AND ME, like Coate's journey, is visceral, eloquent and beautifully redemptive. And its examination of the hazards and hopes of black male life is as profound as it is revelatory. This is required reading."

Becoming by Michelle Obama: I read most of this book when it was STOLEN by a friend and I recently had the opportunity to steal it back. As you can see from this list and photo, I like to read physical books.

Leonardo Da Vinci by Walter Isaacson: I love this book about Da Vinci. We all know of him but the details really grab me. He finished almost nothing and had such enthusiasm for everything. I find him fascinating and I read half of this months ago. It fell behind the shelf and I just found it again.

White Fragility by Robin Diangelo: "Why it's so hard for white people to talk about racism." This book was recommended in a screenwriting class I was taking. I couldn't get a hard copy so I put it on my kindle app.

As you can see, I love to read. My TBR list is much larger than this, but these are on my immediate read pile. I don't know how long until I finish them because I'm also second drafting a novel I'm writing and I put my writing first. Soon. I'll review some here.