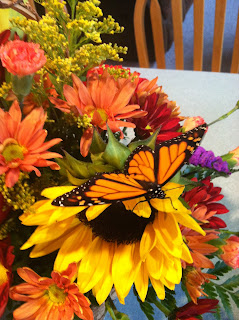 Photo Credit:  Stephanie Karfelt
It’s Archery Hunting Season somewhere in the continental USA. One of my favorite times of the year, though I am no fan of hunting. In my life I’ve hunted one thing, Monarch Butterflies, more precisely, their eggs and larvae. It was my goal to raise one thousand of them a year. Six hundred seemed to be the point where my family would rebel. Since I started writing 40+ hours a week, I quit raising butterflies. This year I happened across a caterpillar the night before a freeze, so I brought it inside (along with a pile of milkweed to feed him). He hatched the night Hurricane Sandy was coming through my area. So I appropriately named him Sandy. Isn’t he beautiful?
Sadly Sandy cannot migrate to the sunny climes of Mexico. He’s a late bloomer and it is too cold for him to fly. He tucks his legs up under his body and flops over when I take him outside. He also does that when I try to feed him, but there is a trick to unfurling a butterfly’s proboscis and making him eat. It reminds me of putting broccoli on the table in front of little kids. You get about that much cooperation. I think he may have snacked on my anniversary flowers willingly, you be the judge.
Back to hunting season, my Dear Hubby is an archery hunter. While he makes himself scarce over hill and dale, company trickles through my house for two solid weeks. I indulge in all-night writes. The grocery budget goes to odd take out (like dessert from my favorite restaurant), or dinner at a new café. Tonight it was a spinach raspberry smoothie at a place with a piano bar. Inexpensive and a place DH would appreciate me visiting while he’s out of town. Next week is a “Blind Harvest Dinner”, served in complete darkness. Another one DH will quickly recover from having missed. Though technically having my anniversary dinner during the hurricane was almost complete darkness.
This year we’ve set the goal of organizing the house. Somehow I’ve managed to score friends and family with organizational capabilities. A feat I appreciate beyond words, especially since they share their mad skills. Right now, as I sit and write my blog, I can hear their sneezes while they sort out a closet in another room. It’s not all fun and games. Earlier I was forced, against my will, to go into stores and choose organizational supplies. Things like storage bins, decorative little shelves, hangers, and baskets. I feel about shopping pretty much the same way my Dear Hubby would feel about that Blind Harvest Dinner. My friends dragged me away from the two foot art deco reindeer that caught my eye, and insisted I cooperate. 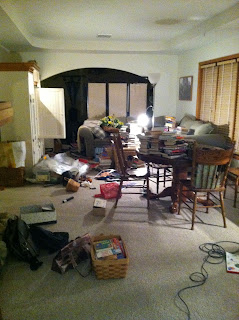 Getting Organized﻿
Jamming an eight foot shelf inside my tiny Time Travel Jeep was an adventure in itself. After twenty minutes at check-out, (during which the cashier tried futilely to ring it out under ‘lingerie’ and requiring the assistance of several managers) we were given a special shelf price of under $40, on the condition that we leave the store. The cashiers even carted our deal out to the car and helped ram it into the car, in the rain. And even though we drove home with the shelf flush against both front and rear windshields, blessedly no deer or bunnies darted out in front of us, requiring a new windshield. All in all I’d say so far this has been a very successful hunting season. 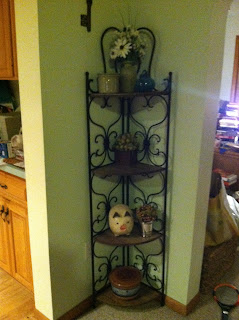 The Bargain Shelf  Organized﻿
What have you hunted lately? Butterflies? Bargains? Your cell phone or a pen that works? Share your stories with me. Tell me what you do during hunting season, even if you have no idea when that is. (It's now by the way.) The Epic Slinky Dog giveaway continues here at The Glitter Globe. All you have to do is leave a comment below and follow my blog. I will randomly pick a commenter. Be sure to swing by later to see if you’ve won!
﻿
at November 03, 2012