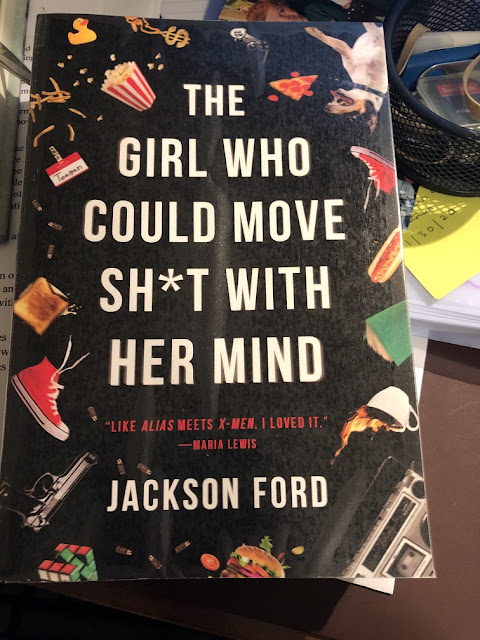 The only thing that could inspire me to step away from writing is the threat of a government fine. So I stopped writing long enough to pay my taxes and get my car inspected. While waiting on my car, I walked to the library. Yes, in January. I'm impressed too. It's cold. I froze.

It's probably been ten years since I went into a library. I love libraries. I'm one of those people who always votes to increase their budget because I want it to be there when it's time for my ten year visit. One of the perks of being a writer is people give me books. Sometimes they're from other writers for a review or promotion, and sometimes they're simply gifts. Also, the local bookstore has chai tea and I go there too much and I buy books there. It's not a financially sound process to buy books with each cup of chai, and to give them away after I read them. But I have to or I'd need a bigger house.

It's really not a surprise, if you've ever seen my purse, that even after ten years I'd still have my library card in there. I also have a card for a taxi driver named Stephanos in Athens, Greece, a stone from Stonehenge, a piece of amber with a bug in it, and a one dollar Egyptian coin with King Tut on it. If I had the chance to take an unplanned trip to Greece or Cairo, I could get a taxi driver I know or skip converting my money because I have a coin worth a good eighteen cents.

What is a surprise was that the ten-year-old library card still works. It was nice and warm in the library and I could have free books for about three weeks which makes good fiscal sense. I grabbed the newest Margaret Atwood novel and a book on coding written for someone about ten years old. I learned more about coding in the few minutes I perused it than I ever knew, so I checked it out.

I also picked up a book by a writer I'd never heard of before. Jackson Ford. He wrote The Girl Who Could Move Sh*t with Her Mind. I love titles that tell you what you need to know. There's a book I loved called The 100 Year Old Man Who Climbed Out the Window and Disappeared. It's by Jonas Jonasson. You have the synopsis in the title with these kinds of books.

I'd bet that The Girl Who Could Move Sh*t with Her Mind will become a television show/movie (the 100 year old man book did). I could sense that as I read it. It's about a woman named Teagan Frost, who was genetically altered by her science-minded parents to have the ability to move sh*t with her mind. She gets taken by the government and forced to work for an agency called China Shop. By day they move furniture, and on the side they're spies. At least they're the kind who break into buildings and take information.

It's an action packed novel and nothing goes right for Teagan. Her powers are limited and hurt her, and you can't help but feel sorry for her forced into a life she doesn't want. Teagan wants to run a restaurant. Her hobby is eating. She's rude and swears a lot. You can't help but like her when she's getting tasered, punched in the face, or jumping out an eighty story window.

The book is set in L.A., and I'm not familiar with L.A. other than passing through a couple times. The setting didn't sound like the place I'd passed through, and at the end of the book the author admitted he'd never been there. Someone more familiar with it would have to make the call on the authenticity, but who cares? It was escapism. My only other criticism is that they use the word kerb for curb and somehow they use that word a lot. That may be a translation issue, I don't think it was written in English originally.

As a nitpicky writer little things like that bump me out of a story. I know it's dumb, but it does. Mostly I think things like OMG, is this a new writing thing? Has curb officially become kerb? Because sometimes there are weird little writing rules, like having to capitalize dumpster (I refuse. I hate other people's nitpicky rules, especially when they look like errors to the reader when technically they're correct. Dumpster was/is a brand name). I only like MY nitpicky things, not other peoples. I can be annoying like Teagan.

Anyway, I'd give this book a solid four out of five stars for pure escapism, but no depth. I tend to be generous with my stars. As a writer I'm aware that someone took the time to do all that work and transform this story into a fast-paced exciting read. I'm not going to poo-poo it because it's not what I'd have written.

The Girl Who Could Move Sh*t with Her Mind ends by opening up the story for the next book in a series, which is a thing series writers are supposed to do too. So kudos to Jackson Ford. But I'll be moving on to my ten-year-old level book on coding now, and I'll wait for the movie or the series. If it never happens, and I spot the next book in the library someday, well, I'd definitely pick it up. Maybe, maybe, I'd buy it to read with a chai too—that depends entirely on the cover.