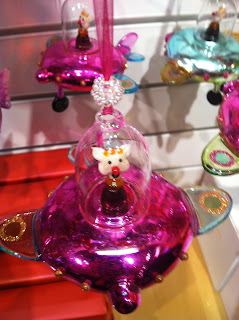 Is the quest to keep things simple for the holidays, Grinchy?  Because I was going for meaningful. I went to a local glass studio and made blown glass ornaments. (With my own two hands and hot air.)  They’re really beautiful, fun to make, and I thought being handmade would keep in the spirit of the season. What I hadn’t thought about, what slipped to the back of The Glitter Globe, was the fact that I have to mail this stuff to far off lands. Maybe next year I’ll opt for something really simple to wrap and mail, like bowling balls. 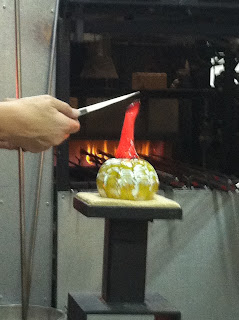 This morning I tossed on my running clothes and thought, I’ll just wrap this stuff and get it ready to mail first. Then I’ll run. Six hours later everything is wrapped, packaged, and ready for transportation to the post office. Thanks to the Epic Slinky Dog giveaway, I go there quite often. I hand the post master the familiar puffy envelopes, with that telltale Epic Slinky Dog rattle, and he weighs them and asks the same question, “Any liquids, perishables, or flammables?”  And I answer, “Only inasmuch as the expected methane emissions of your average Epic Slinky Dog during transport.”  Kidding, the USPS doesn’t joke around. I say, “Fragile”. Then he slams the big red FRAGILE stamp down on ESD with a bam, and Slinky is on his way. Tomorrow I expect to pretty much spend the day with the postmaster, filling out customs forms. Imagine his face when I drag this lot in. I have a consolation prize for him in my purse. Yes, his very own Epic Slinky Dog. Don’t you think everyone at the post office needs one this time of year? 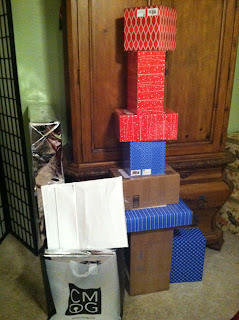 Photo Credit:  Stephanie Karfelt
How are your brilliant holiday plans working out?  ‘Iceland’ has been inundated with a rash of those slightly disturbing glorious sunny days. It’s December, there’s usually snow. I feel almost guilty basking in perfect jogging days, when the wonky weather changes have wrought so much damage. Jogging to my latest favorite running song (“Kill Your Heroes” by AWOLNATION) a text interrupted me. How inconvenient. Had to close my Facebook app (right in the middle of an Instant Message conversation) to read the text. It was from BFF and read…
“Christmas songs that should never have been – Bob Dylan singing “Must Be Santa” accompanied by an accordion. Yes, really!...”
I resisted the urge to open iTunes right then and there. I was jogging, and it’s very difficult to punch in your password properly when you’re running. So I texted back…
“Lol Timnin”
Which we all know means I’m laughing out loud, while texting and running. BFF is used to such responses. Of course I hit YouTube to check out said video and this is what I found:  Must Be Santa by Bob Dylan
It made me laugh, and I appreciate that. Thank you Mr. Dylan (or Sir or Knight or whatever it is). What do you think about the accordion accompanied song?  And of all the holiday songs that are out there right now, which ones do you think should have NEVER been?  And now I’m going to go run, at last. Just as soon as I get this blog posted.
***
This is the part about the fun and games and giveaways. If you leave a comment (and “Join this Site”) you’re eligible for your very own Epic Slinky Dog/giveaways. I’m planning to give away at least two ESD on this post. Since it is Christmas, I’ll also be keeping in the spirit of the season by giving away another $25 gift card to Barnes & Noble. After this post hits 25 comments (spam doesn’t count), I’ll randomly pick one winner from the comment section for the gift card. Be sure to check back to see if you’ve won. (If I can’t locate a winner within 48 hours, I will choose another.) 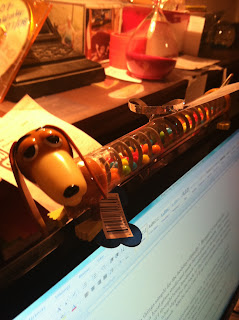