Walk on the Wild Side 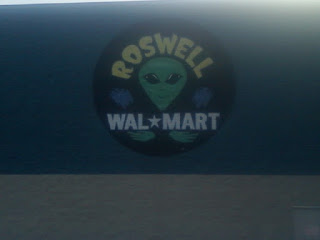 Standing outside a Walmart in Roswell, New Mexico, I snapped pictures of the front of the building. With little more than an eye-roll, I’d driven past the touristy UFO museums and streetlights shaped like alien heads. This was too sweet to pass up. A big beefy biker dude watched me. I battled the blinding desert sun, hoping to get a decent picture of the storefront mural. The biker got off his bike and made his way over to me. Somehow he managed to wear head to toe leather despite the heat. Skin not encased in leather was covered in tattoos. “Come ‘ere,” he said, “Wanna show ya somethin’.”  Broad daylight, Walmart parking lot, big freaky biker guy, I’m game, so I followed him back to the bike. “Lookit tha’” he motioned with his head to his bike. I know as much about motorcycles as I do cars. They consist of metal and rubber. He proudly pointed out the kickstand. It looked like the alien in the Sigourney Weaver movies, only in chrome. Sweet.
Sometimes I put it on my mental to-do list. ‘Today I will do something that scares me.’  The purpose of the mandate is writing fodder. That road trip through New Mexico provided plenty of opportunity for scares and fodder. My favorite creep-out being the “CAUTION RATTLESNAKES!” signs at the rest areas. The scariest being bedbugs in a rather nice hotel, I could have lived without that. It has plagued me at every hotel I’ve stayed at since. 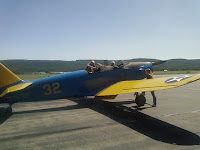 Flying doesn’t bother me, but my favorite part of flying in an open cockpit airplane was definitely the landing. Sticking your head out of a moving aircraft isn’t nearly as much fun as it sounds. Even though flying over my own house was kind of cool. It made me realize that we don’t weed-whack nearly enough. Someone should get on that.
The National Whitewater Center has a really fun ropes course and whitewater rafting opportunities. I hit the water one chilly autumn day and enjoyed every shivering minute of it. The part that scared me ended up not being my time in the water. Continuing a lifelong tradition of refusing to climb into a rental wetsuit sans underclothes, I was then faced with the reality of soaking wet and icy cold under things for my long drive home. A half hour later I sat at Sonic with a Cherry-Coke slush, commando. My rafting buddy, Angel, and I decided it was rather liberating. Talk about taking a walk on the wild side. 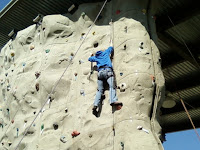 Still handing out boxes of Bertie Bott’s Every Flavour Beans here at The Glitter Globe. Are you up for trying something that scares you?  Tell me about your walk on the wild side. What have you done lately that scares you?  Was it as bad as you thought it would be?  I’d really like to know your favorite creep-out. ﻿

Photo Credit:  Stephanie Karfelt
***
The Epic Slinky Dog Giveaway continues here at The Glitter Globe also!  Dual giveaways!  Follow my blog, to be eligible, and leave a comment. I’ll pick five comments for a box of Every Flavour Beans. And for every five new followers I get, I randomly pick someone from the comment section for a Slinky Dog!
Now that just scares me