Bait and Switch - The Dark Side of Fishing

﻿
Elle was driving in the conversion van she’d nicknamed The Dumpster. It is amazing the amount of fallout a handful of kids can leave behind: soccer balls, cleats, dirty socks, petrified chicken nuggets. A buzzing drone sounded from the back of the van and she worried it was a hornet. It was loud. Glancing back she saw the biggest, fattest insect she’d ever seen, sorta flying towards her. It approached unnaturally slow and jerky, dropping in altitude before struggling upwards, slowly making its way to the front of the van.
Using a piece of junk mail, Elle easily batted it into the passenger window. The bug’s exoskeleton cracked against the glass and it fell to the seat, dead. It was an enormous fly. Gross. At the next traffic light, the sound again came from the back of the van. During Elle’s entire drive she swatted mutant flies to their death. Once home she conducted an impromptu archaeological dig and discovered a cardboard box marked BAIT. It was mislabeled, because what it now contained was actually - hatching bait.
BFF called me today, woke me from a sound sleep to snap into the phone, “Thought you said you tell the truth in your writing.”  I’m summarizing here, but the gist of it went like this. “Why’d you write a fishing blog like you just did?  Tell the truth. Tell the Dark Side of Fishing! Remember when I was expecting, and opened that Tupperware container in the fridge, and it was full of fish eggs?!  Do you remember what happened?  I sure do!”  Oh yeah, I sure do too. I also remember the time my son left worms in the pockets of his pants, course he was little then, now it’s just hooks and sinkers that wind up wedged in the washer or dryer (which is far better than bullets, but that’s hunting season and I digress). Once the dog knocked over a bucket of minnows and rolled in it. We didn’t know until it was far too late for the minnows. Actually we didn’t know until the beagle came proudly strutting across the yard with bits of silvery fish sticking to his hide.
BFF has been happily married as long as I have; it’s just super easy to forget the happily part during fishing season. She’s mentioned more than once that her terrific hubby has only one chink in his armor - the lady who runs the local bait shop. BFF said DH would dump her like hatched bait for that 104 year old woman, just for access to unlimited, free bait. I don’t believe that. There’s plenty of room in his heart for both of them.
So here’s the naked truth when you marry a fisherman.
There will be boxes of live crickets that come in the mail and your mail carrier will laugh every time she sees you. There will be piles of real worms gathered on rainy spring nights, by the light of the moon, and your spouse will have at least one child in tow, both wearing those Nerd-Headlights (your neighbors will be afraid to ask). Your cat will get inside the worm box and generously bring you a pile to share. On the carpet.
When your in-laws visit, you will find a big box of feathers next to the guest room bed. For years you will try to not think of why, but eventually you’ll realize that it was a fly-tying kit. Family photos will often involve at least one great big fish. You will know so much about the life cycle of insects, that you will be able to identify what type of larvae are produced by what type of beetle. Eventually you’ll even realize that there is far more to fishing than just tossing a hook into some water. 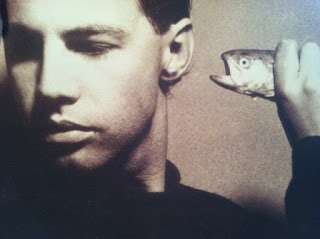 Of course you will fish with your Sweetie. Love does crazy things to you. You will find out that it is possible to be violently seasick for every second a boat is on the sea. You will not eat Codfish for ten years after deep-sea fishing off the coast of Gloucester. Twenty years later you will still remember the smell. Ocean fishing with your in-laws you will discover that shrimp is used as bait. You will also discover that live shrimp looks exactly like it does in a shrimp cocktail, minus little black eyes and some whiskery-appendages. You will not eat shrimp for ten years. At some point you will have to admit that there is a difference between enjoying and enduring. At some point you will suspect fishing won’t be your thing unless a fishing gene is located, and it is spliced into your DNA. At another point you will realize that your Sweetie is a fisherman, not just a man. If you’re super lucky, you’ll have a BFF to commiserate with.
at April 20, 2012