It was briefly thrilling and exciting, but then the consequences appeared. I’m not referring to those lovely dark chocolate covered pomegranates and my previously baggy jeans – though that is a good analogy – I’m speaking of reaching “The End” of my latest story. It’s the one I’ve been working on for longer than I care to publicly admit, that has been rewritten so many times that off hand, I’m not even certain what that number would be.
Like the cat slinking up the hallway in the dark, it snuck up on me, batting at me with soft paws to announce, “Bet you didn’t see this coming!”  Just like that half feral pet, I knew the ending was somewhere close by, but I had no idea it was so close. After all those long rewrites, I hadn’t expected that ending to just flow, I’d expected to need pliers and possibly professional help to extract it.
Nope, the sun peeked through the clouds just like it should, and I had my ending. Admittedly I danced in circles a bit, and then I plowed right on into The Edit. If you don’t write, an edit is kind of like this:  Take last year, now go through it a day at a time and fix it. Hopefully you want it to end just like it did (if not, that’s called a rewrite) you just have to polish up the dialogue, check your spelling and punctuation. It’s best if all the drama hits around October and you wrap it up by mid-December and be sure that you tie up all those endings neatly by New Year’s Eve.
Yesterday I edited my way through July. Today I reread a whole lot, dug a piece of cold chicken out of the fridge and plunked down in front of a movie about a couple trapped in the Grand Canyon. For starters I am officially the worst vegetarian ever, and I paid the price when the lady in the movie had to cut off her husband’s foot. I watched the last 2/3rds of the movie nauseous and standing in the doorway pretending to head back towards my edit. The price for watching that tale? It will be paid in full come March when I’m scheduled to hike down into the canyon with my hubby. I’m all over fighting off wolves for him, but he’s gonna have to cut off his own foot. Procrastination has its own price, doesn’t it? 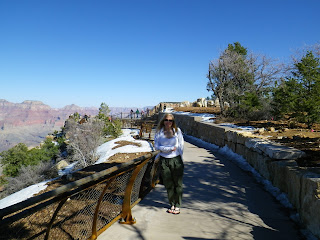